Vekoma, Code of Honor both have Met Mile as an option 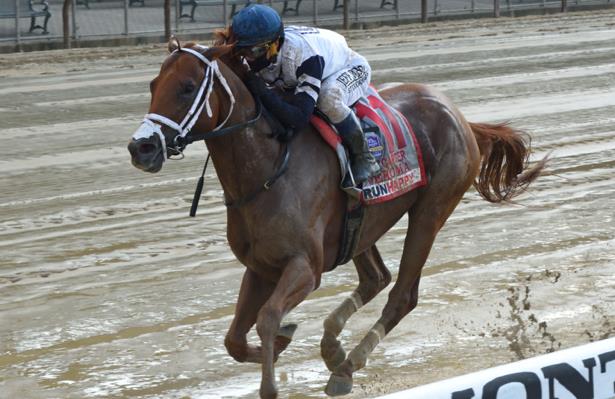 Multiple horses who won in graded company Saturday at Belmont Park — and one who didn’t — are under consideration for what projects to be one of the races of the summer, the July 4 Metropolitan Handicap (G1).

After Code of Honor made a successful 4-year-old debut in the Westchester Stakes (G3), trainer Shug McGaughey said the Met Mile is “an option” for the star colt. Later on the card, trainer George Weaver said Vekoma could also wheel back in that spot off a victory in the Carter Handicap (G1).

“If we can get him back in four weeks and if he's doing well, we'll think about it,” Weaver said. “He’s such a special horse and he's one of those horses that will do things that you may not think are ideal for him.

“He's just that good. I've never had a horse with this much talent and determination in him. He just knows what he is.”

Code of Honor went 1 1/16 miles in the Westchester, making a wide but winning move to nab Endorsed in deep stretch. The Met Mile, which provides a free berth to the Breeders' Cup Dirt Mile to the winner, would keep him at one turn at Belmont Park over the same course and distance at which he dominated the 2019 Dwyer Stakes (G3).

Vekoma, meanwhile, is 2-for-2 this season and unbeaten in his career around one turn after paddling through the slop to a 7 1/4-length Carter victory. The race was missing its morning line favorite, however, after McGaughey scratched Performer the morning of the race.

“He was 95 percent sound this morning, so I don't think I'll lose a lot of time with him,” McGaughey said of Performer, another 4-year-old who he’ll consider for the Met Mile. “So, we'll see.”

McGaughey is unlikely to run Code of Honor and Performer in the same race with a number of options becoming available this summer for older horses — and both the type that could be in play for the Breeders’ Cup in the fall.

McGaughey told the NYRA press office on Sunday Code of Honor could also wait for the Saratoga meet and run in the Whitney (G1), which has yet to be assigned a date.

"He seems to be fine," McGaughey said of Code of Honor. "He looked good yesterday after the race and he looked good this morning. I'll look at the Met Mile and see what the stakes schedule at Saratoga looks like. He had a very good winter and the time off really seemed to help him."

Later Sunday, Bob Baffert-trained McKinzie will use Santa Anita Park’s Triple Bend (G2) as a springboard to the Met Mile, while Dale Romans has already declared multiple graded winner Mr Freeze a go for that spot.

Warrior’s Charge, last year’s Preakness Stakes pace setter, has come back to run around two turns in winning the Razorback Handicap (G3) before a second in the Oaklawn Handicap (G2). Given his speed, he too could cut back as the Met Mile field shapes up.