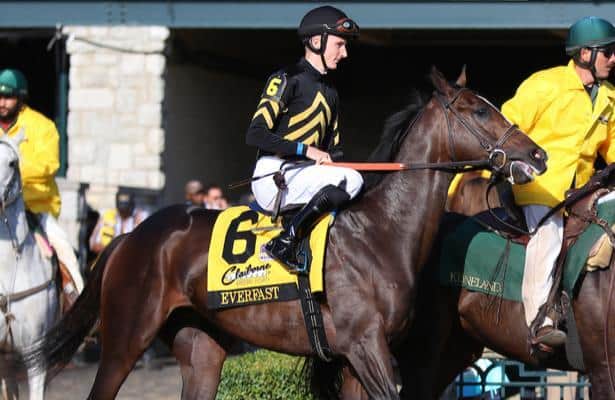 Calumet Farm's Everfast earned a return trip to the winner's circle last out with a 2 ½-length win against allowance company Aug. 1 at Saratoga. The runner-up in last year's Preakness could have a return engagement at the Spa, as trainer Jack Sisterson said he is pointing to the Grade 1, $300,000 Forego on Aug. 29.

Sisterson took over the training duties for Everfast heading into his 4-year-old campaign. The Kentucky bred ran second in back-to-back one-mile contests on the main track to start 2020, finishing a neck behind Dressman in an allowance tilt in April at Oaklawn Park before running a half-length back to Owendale in the Blame on May 23 at Churchill.

Everfast tried turf in the Maker's Mark Mile (G1) in July at Keeneland, finishing ninth, and Sisterson said a return to the main track best suits his strength. After earning an 83 Beyer for his win over the Spa's main track, he will get another chance in the seven-furlong Forego. Everfast breezed four furlongs in 48.34 on Saturday over the Saratoga main track.

"He's been very consistent in his three dirt runs with a good second at Oaklawn off a layoff, a good second in the Blame and then he went on going seven-eighths in convincing fashion with a lot left in reserve," Sisterson said. "He's definitely a dirt horse and in my opinion, seven-eighths to a mile (is best). He's naturally built for speed. We didn't train him to pick up the speed, he actually brought that on.

"He breezed very well yesterday. I actually thought he'd be very lazy on his own because he had a tendency to be very workman-like at home in Keeneland and we didn't want to do too much in his first work back from his win. But he was a different horse at Saratoga breezing. He was full of energy and could have done a lot more. That being said, we'll breeze him on Saturday and point him to the Forego."

Everfast had a 10-race campaign as a sophomore, with nine of those contests against graded stakes company as he traversed the Triple Crown trail. Trained at the time by Dale Romans, Everfast ran second in the Holy Bull (G2) and was 1¼ lengths back to War of Will in the Preakness, starting a stretch of four straight Grade 1 appearances that included the Belmont Stakes (seventh), Haskell (fourth) and Runhappy Travers (12th).

Vexatious put in her first breeze since winning the Personal Ensign (G1) on Aug. 1, going four furlongs in 48.98 seconds over the main track Saturday.

Vexatious turned back a challenge from five-time Grade 1-winning champion Midnight Bisou, winning the Personal Ensign by a neck and securing an automatic entry to the Breeders' Cup Distaff in November at Keeneland.

Sisterson said he is looking at the $400,000 Spinster (G1) on Oct. 4 at Keeneland, which would make for an easy transition to the Breeders' Cup without requiring additional shipping later in the fall.

"Initially, it was the Spinster at Keeneland,” Sisterson said. “Keeneland is home for us and it's her home and obviously the Breeders' Cup is there this year.

"She breezed very well yesterday and will come back again next week, pending weather. We'll keep her on the schedule, but we won't force anything upon her. If she breezes like she did again and comes back with another breeze like that, I think she'd tell us she came out of the race in great shape and we might look to run her sooner."

Vexatious has registered triple digit Beyers in consecutive starts, with a 100 for her second-place finish by two lengths on Monomoy Girl in the Ruffian (G2) on July 11 at Belmont followed by her 105 earlier this month.

"She's very versatile,” Sisterson said. “She can be in the back; she can be forwardly placed. She has a very high cruising speed.

"She's just a straight-forwarded filly who trains herself."

Derby Radar: The Great One romps for O'Neill; Fenway last
Back in with maidens after being beaten just a nos...