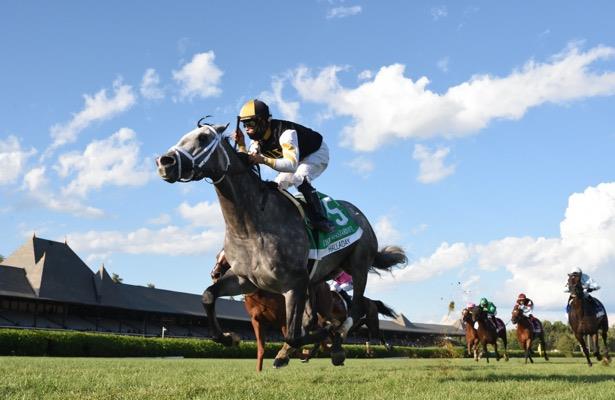 Along with the winner’s share of the $750,000 purse, a victory carries a “Win and You’re In” spot for the Breeders’ Cup Mile on Saturday, Nov. 7, which also will be run at the Lexington, Ky., track.

The Shadwell Mile is carded as race 10 out of 11 with post time set for 5:57 pm ET. Here is a full field analysis with the official track morning line odds.

2) Halladay [ML 5-2 – War Front – T. Pletcher/L. Saez – 14: 6-2-4 - $517,485] is in the best form of his career with three wins in his past four starts, including a career-defining victory in the Fourstardave. All three of those wins earned triple-digit Beyer Speed Figures. The Todd Pletcher trainee won that Saratoga stake on the front end. Top choice.

3) Without Parole [ML 12-1 – Frankel (GB) – C. Brown/J. Leparoux – 14: 4-0-2 - $885,986] has not been able to find the winner’s circle for Chad Brown in five Grade 1 races in America. Early in his career, he won the St. James Palace Stakes (G1) at Royal Ascot going a mile. Julien Leparoux will get the mount with regular rider Irad Ortiz Jr. unavailable, and he does particularly well with late runners like this 5-year-old. However, the son of Frankel has found another very tough field. Toss.

4) Bowies Hero [ML 15-1 – Artie Schiller – P. D’Amato/R. Bejarano – 25: 8-2-3 - $1,580,970] will try to become only the third horse to win the Shadwell Mile in consecutive years. The millionaire will cut back to the mile distance after two below-par performances going longer. All but one of his eight career victories came going the mile. Unusually high odds make him attractive in the exotics. Use underneath.

5) Born Great [ML 20-1 – Scat Daddy – B. Walsh/C. Lanerie – 3: 2-1-0 - $118,900] won two races in a week at Kentucky Downs when he broke his maiden and then came right back to take down an allowance while sprinting in both of those starts. Trainer Brendan Walsh is asking a lot of this 4-year-old to stretch out in distance and face Grade 1 company. Toss.

6) Raging Bull [ML 6-1 – Dark Angel (IRE) – C. Brown/J. Rosario – 15: 6-2-3 - $1,146,750] had a big win in the Shoemaker Mile (G1) back in the Spring, but after a third in the Makers Mile (G1) at Keeneland and a fifth in the Fourstardave, trainer Chad Brown has decided to take the blinkers off. Joel Rosario stays on board and will hope that the equipment change allows him to make a strong late run. The odds will be higher than usual for a Brown runner with so much back class. Use underneath.

7) Flavius [ML 9-2 – War Front – C. Brown/R. Santana Jr. – 7: 3-1-1 - $518,673] The third 5-year-old from the Chad Brown stable is the recent winner of the Tourist Mile at Kentucky Downs, which was his first victory since coming over from Ireland, where he won twice at Leopardstown. The late-running son of War Front is seeking his first graded stakes win. Use underneath.

8) Analyze It [ML 9-2 – Point of Entry – C. Brown/T. Gaffalione – 9: 4-3-1 - $849,400] came back from a 22-month layoff to win the Red Bank (G3) going a mile at Monmouth Park after pressing the early pace. In some of his races as a 3-year-old, he raced closer to the front, and that speed should allow him to get to a desirable stalking position. He will be dangerous if he can make a step forward off that extended break. Win contender.

9) Parlor [ML 6-1 – Lonhro (AUS) – M. Maker/U. Rispoli – 30: 6-7-5 - $569,227] comes from the barn of the outstanding turf trainer Michael Maker. He had the lead in the stretch in the Maker's Mark Mile in July but drifted out a bit and lost a head bob by a nose. His subsequent start in the Tourist Mile was disappointing, as outstanding California turf rider Umberto Rispoli now gets the mount. Parlor has done his best running when he’s close to the early pace. Use underneath.

10) Spectacular Gem [ML 15-1 – Can the Man – J. Baker/J. Graham – 17: 6-1-3 - $317,281] has two wins at a mile earlier in the summer in Kentucky with a high-level allowance score at Churchill Downs followed by a stakes race at Ellis Park in August. He was sixth in the Turf Classic (G1) last month going nine furlongs. Spectacular Gem does his best running while part of the early pace but in this field that might be a lot to ask. Toss.

Summary: The Shadwell Mile presents an interesting handicapping challenge. The field of 11 is loaded with horses that have a late running style, but the favorite Halladay is the recent front-running winner of the Fourstardave at Saratoga.

Halladay is in the best form of his career with wins in three of his last four races, all since Luis Saez took over as the regular rider. Saez is particularly adept at taking charge of races when the other riders prefer to rate their horses to prepare for a closing move. There are a couple of other horses that prefer to press the early pace but don’t have Grade 1 quality.

Chad Brown is expected to win any graded stakes race on the grass, and his horses usually come with short odds. However, he has four horses in this field that are listed at morning line odds of 12-1, 6-1, 9-2, and 9-2.