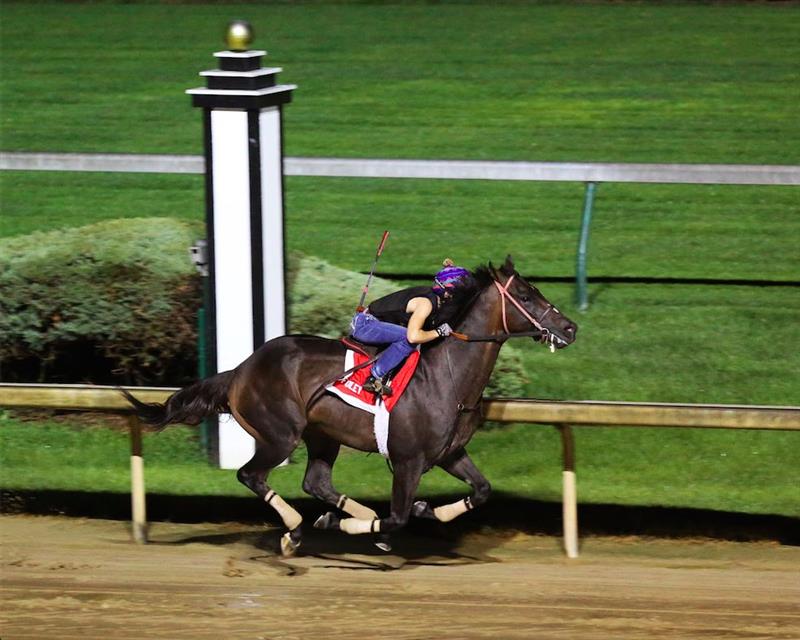 It was a busy morning for jockey Brian Hernandez Jr., who worked both Swiss Skydiver and Art Collector. Hernandez got the leg up on Swiss Skydiver around 5:30 a.m. (all times Eastern) and the filly worked through fractions of :13.40, :26.40 and :38.20. She finished her workout with a six-furlong gallop out in 1:14.20, according to Churchill Downs clocker John Nichols.

“She worked really good and handled the muddy surface well,” Hernandez said. “She’s a very talented filly as we saw in the Blue Grass how well she handled running against the boys. She cruised along out there this morning.”

Trainer Kenny McPeek reported that Swiss Skydiver would ship to Saratoga and run in the $600,000 Alabama (GI) on Saturday, Aug. 15. Although a moot point in the case of Swiss Skydiver, who is automatically qualified for the Kentucky Oaks with 350 points, the Alabama will offer the Top 4 finishers points on a 100-40-20-10 scale for the Sept. 4 event.

“It’s so nice to have a horse who is versatile and can really run over any surface,” trainer Tommy Drury said. “He did everything very easily this morning and it was really just a perfect work. We are still taking things one day at a time. We just have to get there and we’re keeping our fingers crossed.”

Drury reported the plan is to still point to next Sunday’s Ellis Park Derby as Art Collector’s final prep for the first Saturday in September.

One of the first horses to record a workout this morning at Churchill Downs was Enforceable. Sporting blinkers, which he’s worn since breaking his maiden last August, the striking gray son of Tapit worked in company on the outside of 3-year-old maiden Ghost Fighter. Enforceable, under jockey Declan Carroll, started about two lengths behind his stablemate and worked through fractions of :12.80, :25.60 and :38.40. Enforceable finished about a half-length to the good at the wire but continued in front through a six-furlong gallop out of 1:15.80 and finished his work with a seven-furlong time of 1:29.60.

“I was very happy with how he worked this morning,” said 21-year-old Carroll, whose father, David, oversees trainer Mark Casse’s Churchill Downs string. “He did everything in stride. I was just the pilot.”

Casse was not in town for the work but reported via text following watching a short video of his stretch run, “I really like what I’m seeing.”

About five minutes after Enforceable completed his work, Major Fed recorded his first published move since running second in the July 8 Indiana Derby. Under exercise rider Lindsey Hebert, Major Fed swiftly began his breeze at the three-eighths pole with opening fractions of :12.60 and :37.60. The son of Ghostzapper continued his work around the clubhouse turn and completed a six-furlong gallop out in 1:03.60.

“We gave him a little time off following the Indiana Derby but he’s been training pretty steady for a couple of weeks now,” trainer Greg Foley said. “This was his first work back and he handled things very well. It wasn’t one of those works where he needed to do much and he looked really comfortable out there.”