Separationofpowers back from injury in Belmont's Vagrancy 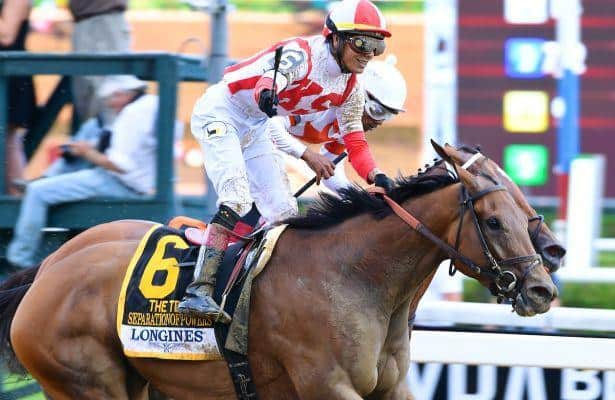 Following an eight-month layoff, Klaravich Stables' two-time Grade 1 winner Separationofpowers will be making her 4-year-old debut in Saturday's Grade 3, $200,000 Vagrancy, a 6 ½-furlong test for fillies and mares on the Belmont Park main track.

Carded as the first race on Saturday, the Vagrancy kicks off the Man o' War Racing Festival at Belmont Park which features four other stakes -- three graded -- and is highlighted by the Grade 1 $700,000 Man o' War over the inner turf. First post is 1:30 p.m.

She last raced in the Grade 1 Cotillion at Parx, finishing a distant fourth on September 22.

"She came out of it with a chip in her ankle, so we had to do surgery," Brown said. "This is her first race back, but she's doing really well."

Separationofpowers was a Grade 1 winner in her third career start when taking the Frizette at Belmont Park by 3 ½ lengths over eventual Grade 1 Breeders' Cup Juvenile Fillies winner Caledonia Road. She boasts the highest amount of career earnings in the field with a bankroll of $772,500.

She was purchased for $190,000 as a weanling at Keeneland's November Mixed Sale in 2015. Bred in Kentucky by Northwest Farm, she is out of the Empire Maker broodmare Shehadmefromhello, who also produced turf stakes winner Empire of War.

Separationofpowers will be ridden by Jose Ortiz from post 4.

Last time out, she was fifth in this year's edition of the Distaff, which Come Dancing won. In seven starts over the Belmont main track, she has found the winner's circle three times.

Holiday Disguise is a half-sister to two-time stakes winner and Rice trainee Midnight Disguise. She will be ridden by Jose Lezcano.

Breaking to the outside from post five is Stonestreet Stables' Dawn the Destroyer who won the Interborough at Aqueduct three starts back.

Trained by Kiaran McLaughlin, the 5-year-old daughter of Speightstown has raced over the main track at Belmont once, finishing third behind eventual stakes winner Your Love and last year's Vagrancy winner Kirby's Penny in a 6 ½ furlong allowance event. Four starts ago, Dawn the Destroyer won off a seven-month layoff on November 29 at Aqueduct over stakes winner Kathryn the Wise.

She will be ridden by Hall of Famer Javier Castellano. Completing the field are Pacific Gale (post 1, Joe Bravo) and Heavenhasmynikki (post 2, Kendrick Carmouche).