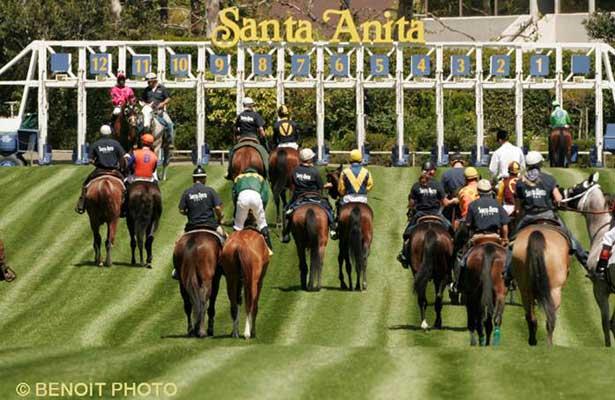 “It’s fast, but it has good bounce to it and the horses are coming back well,” said Hall of Fame conditioner Neil Drysdale. “As you can see from the results, you can win on the front, middle and the back.”

Said Hall of Famer Jerry Hollendorfer, with 7,173 career victories entering today’s races: “The good thing about the turf course right now is that there are no complaints. If there was something wrong, you would hear complaints, first from the riders and then the trainers.

“But so far, there hasn’t been a single complaint that I know of.”

Added Hall of Fame jockey Gary Stevens, who has ridden the world-over and counts three Kentucky Derbies and 10 Breeders’ Cup triumphs among his more than 5,000 career wins: “It’s very kind. I’ve noticed when we walk on the turf course, you can see the hoof print where a horse has stepped and then it looks like one of those mattresses or pillows that you can watch rise right back up in front of your eyes . . . That’s what it’s like running on; it’s just like a big pillow.”

Irish-bred Paddy Gallagher, who took his early lessons on the green of the Emerald Isle, said: “It’s not a long course, but there’s a great thatch to it and it’s got a good spring to it. It’s one of the best grass courses in the country, I believe.”

Tim Yakteen, who is preparing recent Zuma Beach Stakes winner Big Score for the $1 million Juvenile Turf on Nov. 4, said, “I’ve run on the turf course several times and horses have come back off of it well. No complaints about it. It has good bounce and good life.”

“I’m really happy with the course,” said 24-year-old French-born Flavien Prat, weaned on European grass courses and in a pitched battle for leading rider at the Autumn Meet.

“The grass here is good. It’s fast, but you can come from behind. I have no problem with it. It’s really good. It’s perfect.”