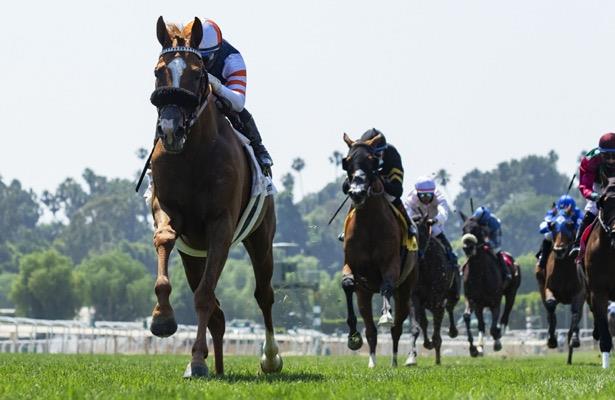 Third in the race a year ago, Red King took center stage in the 81st renewal of the Grade 3, $100,000 San Juan Capistrano Stakes on Sunday at Santa Anita, as he forged by odds on favorite Ward ’n Jerry at the top of the stretch en route to an impressive 4¼-length win under Umberto Rispoli.

Trained by Phil D’Amato, Red King, a 6-year-old horse by English Channel, navigated the marathon mile and three quarters on turf in 2:46.67.

Breaking from the top of Santa Anita’s legendary Camino Real Turf Course, Red King was unhurried early and was fifth, about nine lengths off of dueling leaders Kershaw and Ward ‘n Jerry.

Fifth, but only five lengths back as the field angled up the backside, Red King moved into third, about 2½ lengths off the leaders midway around the far turn and wheeled three-deep turning for home, from where he inhaled Ward ’n Jerry approaching the furlong pole.

“Growing up here in LA, this was always one of my favorite races as a kid,” D’Amato said. “I remember I used to stand on the apron way past the wire and watch them come home in this race, just so I could take it all in. It’s an amazing race and it’s really cool to win it.

“My horse won his last race and that picked his confidence up.  It looked like maybe the favorite moved a little soon and Umberto was in the right spot.”

Owned by Little Red Feather Racing Gordon Jacobsen and Philip Belmonte, Red King, who is out of the A.P. Indy mare Youre Speeding, picked up his first ever stakes win and his sixth win from 27 career starts. With the winner’s share of $60,000, he now has earnings of $278,115.

“It was my first time going from the top of the downhill and… it is beautiful,” said Italy native Rispoli, who was also riding Red King for the first time. “The grass is amazing, it’s a really good track.

“It’s been a long time since I’ve gone so far in a race because in Europe, we used to go quite enough every day. But it was a good feeling, obviously you need a horse like that.”

Siberian Iris, the lone female in the lineup, rallied from far back for the place, finishing three quarters of a length in front of Ward ’n Jerry.