Preakness Stakes: At least five are set to challenge Authentic 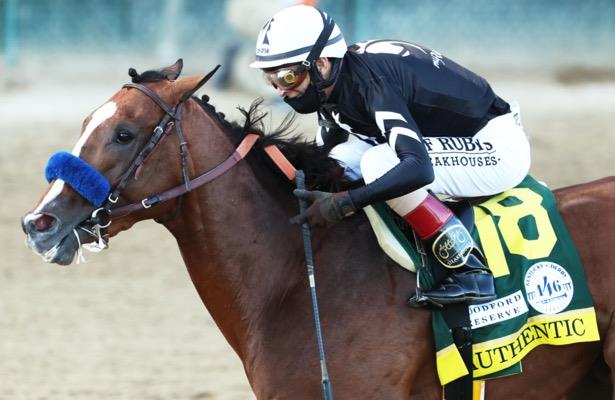 Kentucky Derby winner Authentic appears to have five firm challengers committed to the Preakness Stakes, at least four others that are possibilities and several other candidates that apparently were moved out of the picture for the Oct. 3 race.

“I just say who’s entering,” said Coley Blind, stakes coordinator for the Maryland Jockey Club and for 12 years the gatekeeper for what next month will be the Triple Crown finale.

Third-place Derby finisher Mr. Big News is committed for entry, according to Blind and trainer Bret Calhoun. New shooters Art Collector, Happy Saver, Pneumatic and Thousand Words are also expected by Blind to have their names in the entry box by the Sept. 28 deadline.

Belmont Stakes winner and Kentucky Derby runner-up Tiz The Law remains a possibility, Blind said, adding that trainer “Barclay (Tagg) will let me know when he makes a decision.”

Tiz The Law’s lead owner Jack Knowlton told the New York Racing Association that a decision could come after “we’ll have a work (this) weekend to assess where we are.”

Calhoun confirmed his intent to have Oaklawn Stakes winner Mr. Big News back for his second classic. “Will probably work Friday,” he said in a text, “but am still probable at this point.”

Graded-stakes winners Art Collector and Thousand Words are looking to make up for the opportunity they lost at Churchill Downs, where they were removed from consideration for the Derby. Art Collector grabbed a quarter in training the day before entries were taken. Thousand Words reared and flipped over in the paddock minutes before he would have raced against stable mate Authentic.

Trainer Tommy Drury said last week that “Art Collector is back galloping and will be pointed to the Preakness.” Bob Baffert reaffirmed this week that both Authentic and Thousand Words are good to go to Pimlico.

Happy Saver’s victory last week in the Federico Tesio Stakes at Laurel Park made him 3-for-3 and put him on course for the Preakness, for which he will have to be supplemented for $25,000. Blind expected him to be in the race. Asked Tuesday if they were still headed in that direction, trainer Todd Pletcher texted, “Possibly. Won’t decide until the week of the race.”

A listed-stakes victory last month at Monmouth Park put Pneumatic on course for the Preakness. “That’s what I was told by Scott,” Blind said, referring to Scott Blasi, trainer Steve Asmussen’s assistant.

Although Blind said that he understood that Jim Dandy winner Mystic Guide was probable, trainer Mike Stidham texted that he is “only under consideration at this point.” The same goes for Ny Traffic, with trainer Saffie Joseph Jr. answering “no, not yet” when asked whether he had decided on the Preakness.

Jim Dandy runner-up Liveyourbeastlife and Canadian Grade 3 winner Shirl’s Speight have been mentioned as being in the mix for Baltimore next month, but Blind said they were not among his possible entries.

“Everybody’s telling me who I have in my race,” he said. “They’re really wrong.”