Paris Lights prevails in a thriller to win Coaching Club 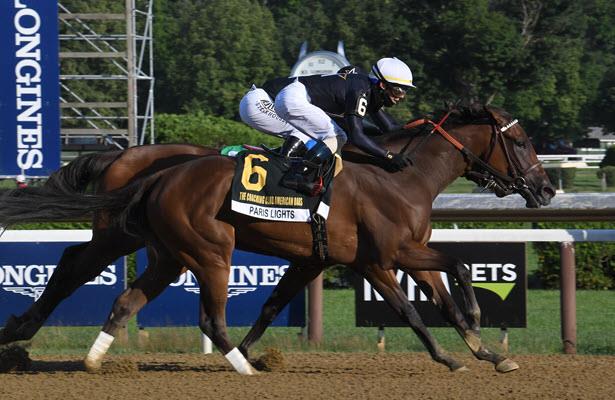 Making her stakes debut, Paris Lights pressed the pace set by Crystal Ball and then prevailed over the front-runner in a thrilling stretch duel to win the Grade 1, $300,000 Coaching Club American Oaks at Saratoga Race Course on Saturday.

With jockey Tyler Gaffalione in the irons, Paris Lights was lapped on the outside of Crystal Ball through fractions of :24.34 and :47.82 for the opening half mile in the 1 1/8-miles Coaching Club. That duo continued to usher the field down the backstretch as 6-5 favorite Tonalist's Shape, who was adding blinkers, raced in mid-pack after having to steady on the first turn.

Crystal Ball, a southern California shipper for trainer Bob Baffert, continued to motor on the lead through six furlongs in 1:11.54, but starting to cut into the lead was Paris Lights. She drew on even terms at the quarter pole and it was a match race to the wire, with Paris Lights besting Crystal Ball by a head.

Paris Lights and Crystal Ball are both owned by WinStar Stablemates Racing.

Paris Lights, who paid $6.00 as the second choice, completed the trip on a fast track in 1:50.80. Crystal Ball was followed across the wire by Antoinette, also trained by Mott, and Tonalist's Shape. The top-four finishers all earned qualifying points towards the Kentucky Oaks.

"My filly just kept digging in," Gaffalione said. "The other filly [Crystal Ball] was a little stubborn to get by, but my filly is all class. All credit to Mr. Mott and his team. As usual, they do such a fabulous job and I'm just thankful I got the opportunity to ride her.

Said Mott: "The other filly [Crystal Ball] fought hard. They both fought hard. The filly that finished second really dug in, but we were the best. Our filly was the best one today and I was very proud of her."

Paris Lights earned her diploma in her second start on May 31 at Churchill Downs and came right back to score an easy first-level allowance win at the home of the Kentucky Derby.

Mott noted that allowance effort set her up well for the big step up into Grade 1 company.

"She's won her last three," Mott continued. "She didn't draw away by 10 [lengths] so you're not going to call her Ruffian just yet, but I'd say she's a pretty accomplished filly for the lack of seasoning. She's gained our confidence that she has some grit and she has some quality."

By Curlin out of the Bernardini mare Paris Bikini, Paris Light puts herself squarely in the mix for the Sept. 4 Kentucky Oaks at Churchill Downs. She earned 100 qualifying points to move up to fourth on the leaderboard, but is currently not nominated.

"I don't see any reason we wouldn't make that her potential goal," Mott said. "We've been lucky enough to win it a couple of times and naturally, I'd like to try it again."