Morley sees his horses 'getting back into form' at Belmont Park 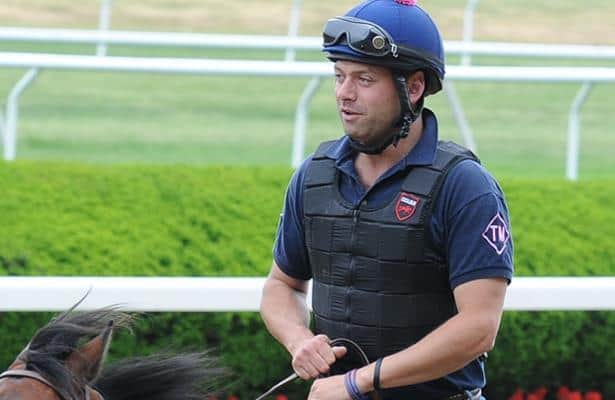 "It had been a quiet start since the Saratoga meet for us," said Morley. "We ended the Belmont spring meet with six wins and then our horses came back to give us another good run at Saratoga. They're just getting back into form after that meet.

"It's nice to get some good wins for a barn like ours competing with the number of horses we have."

Claimed after breaking his maiden on the dirt June 29 at Belmont in his seventh career start, Red Right Hand made his first start on the turf for Morley finishing third in an allowance race July 29 at Saratoga Race Course.

Since then, the Lookin At Lucky gelding has wheeled off three consecutive wins taking an allowance race in his next start at Saratoga followed by an allowance victory Sept. 4 at Delaware Park and most recently capturing a second-level optional claiming race by 1 ½ lengths Oct. 6.

"It's nice to have a quality horse like him in the barn," Morley said. "He's really moved forward in a tremendous way and worked through his conditions."

Still eligible for a third-level allowance, Morley said he would consider that as a possible option next for Red Right Hand as well as nominate for the $150,000 Artie Schiller on Nov. 9 and the Grade 3, $200,000 Red Smith on Nov. 23.

"We'll keep the third level allowance for him as a possibility if that race is able to go as well as nominate for the Artie Schiller and Red Smith," Morley said. "Foolish Ghost came out his victory in good shape as well and we'll look to move forward from here.

“I'm not certain on where we'll point him to next but we've got some runners rounding back into form, so we'll look to keep the momentum going."