Maxfield 'back, happy and healthy' for first work since June 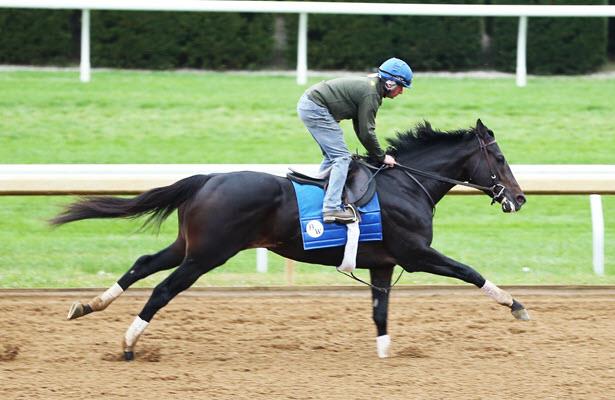 Godolphin homebred Maxfield, the undefeated 3-year-old colt who has been sidelined since an injury in June, was back on the track at Keeneland Sunday morning, working 3 furlongs in 36.8, the sixth fastest of 11 works at the distance.

The 3-year-old Godolphin homebred broke his maiden on first try at Churchill Downs last September and won the Grade 1 Breeders' Futurity next out at Keeneland in October. Then an ankle chip required minor surgery, so the Street Sense colt was unable to compete in the 2019 Breeders' Cup.

Trained by Brendan Walsh, he came back to win the Matt Winn (G3) Stakes at Churchill in May. In his first workout after that race, he suffered a non-displaced condylar fracture, requiring surgery on his right front leg.

Today's work "was his first official breeze" since that injury, Bell said. "Brendan’s been going along very conservative with him. I think probably the horse is ready to do more than what Brendan wants him to. But he’s just been very energetic ... very straightforward since the day [Sept. 10] he came back in to Brendan.

"This is just the progression that we have, and we’re looking to begin to, obviously, get on a steady work pattern now," Bell said. "The good news to all this is that he has continued to grow and develop and mature, and he sure looks it on the track. So we’re very excited about what we see and very hopeful for what might be to come. This is just that first step."

Bell said he and Walsh don't have a definitive timeframe in mind for when Maxfield might race next.

"I think probably the first major obstacle was completed this morning, that easy 3/8, galloped out the half, back in the barn, cooled out well. Now you can sit down with your trainer charts, saying here we are, there we go, and put it together."

Bell said he and Walsh are "in no rush to get anywhere. Hopefully, when he’s ready, he lets us know, and then we can begin to really set our sights on a few things. But more importantly, it’s exciting to see him back, healthy and happy.

"It seems like a long time, but then again it seems like it was yesterday. This is the great thing, is that we’ve gone through that rehab period and we hope he’s better than ever. And always hopeful to give him the opportunity to perhaps showcase what we hope he potentially has. To this point, there’s some unfulfilled potential, but we’re hopeful we’ll get a crack at seeing a great body of work from him this coming year."