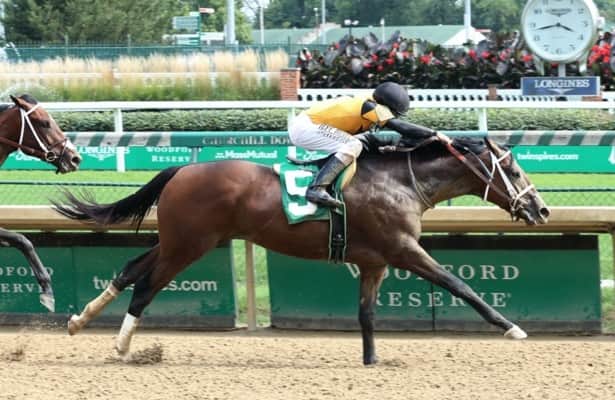 When the Grade 3 Lecomte Stakes goes off on Saturday at Fair Grounds, it presents an early test for horses that could blossom into Kentucky Derby contenders by May. One such colt is Arabian Prince, trained by Dallas Stewart.

Is he a Derby horse?

Stewart has found success in the Derby with long shots in the past, with both Golden Soul (34-1) and Commanding Curve (37-1) previously hitting the board.

Arabian Prince opened at Circa Sports in Las Vegas with 100-1 odds for the 2021 Derby, but he has moved to 25-1 after taking several large wagers from a small circle of bettors.

Arabian Prince will go off from the second post position in the 11-horse race, a spot Stewart said he was perfectly fine with. He’ll face off against a strong Lecomte field, which will include the favored Mandaloun, trained by Brad Cox.

Arabian Prince may not be the favorite, but Stewart expects him to be right at home in the race.

“I don’t think he’s a 20-1 shot,” Stewart said. “I think he fits right in with them. He’s proven that he can handle two turns and that he can finish.”

In his last race, the Kentucky Jockey Club (G2) at Churchill Downs on Nov. 28, the colt, a son of Mshawish out of Jolene, by Malibu Moon, finished in third place, behind Keepmeinmind and Smiley Sobotka, both Derby contenders in their own right.

Stewart said he was pleased with Arabian Prince’s effort in the race.

“I think he’s a mature-acting 3-year-old,” Stewart said. “He stepped up nice for his two-turn debut at Churchill, and everything seems to be going right for him right now.”

For the Lecomte, run at the same distance as the Kentucky Jockey Club at 1 1/16 miles, Stewart singled out an area where he wanted to see improvement from the colt.

Stewart also provided analysis as to what Arabian Prince’s trip could look like in the race.

“He’s kind of a mid-pack type horse,” Stewart said. “He’s not a speed horse. He’ll probably have to find his way through on some horses or come around. He won’t be on the lead, he’s not that type of horse.”

Depending on how the Lecomte goes, Stewart said, he has a few options for the colt’s next race, including the Risen Star (G2) on Feb. 13 and the Louisiana Derby on March. 20, each at Fair Grounds. Both races are part of the Road to the Kentucky Derby, with the Risen Star paying out 50, 20, 10 and 5 points to the top four finishers and the Louisiana Derby offering 100-40-20-10.

“We’ll just have to see how he runs,” Stewart said.