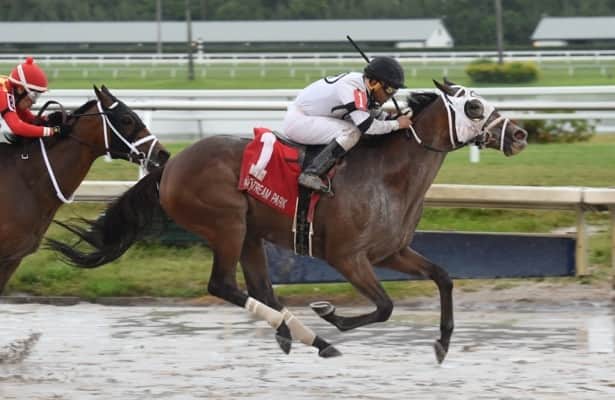 Leading the country by wins heading into Wednesday’s action, trainer Mike Maker will look to keep his momentum going into the weekend when he sends out the pair of Second Mate and Max K. O. in Saturday’s $75,000 Sunshine Turf.

Second Mate and Max K.O. each ran in last year’s Turf, respectively finishing fifth and eighth behind multiple Grade 2 winner March to the Arch. The runner-up, Muggsamatic, was beaten a head in that race and is now also trained by Maker.

According to Equibase statistics, Maker won 16 races through the first 12 days of 2021. Seven of those wins have come during Gulfstream’s Championship Meet, and he is seeking his first victory in the Turf. Eccentric Club Racing Stable’s Second Mate will be making his fourth straight appearance in the race and first for Maker, having run third in 2018 and second in 2019.

Second Mate raced only twice after last year’s Turf, where he was beaten less than three lengths. Both races came at Gulfstream Park West — an optional claiming allowance where he finished off the board following a nine-month layoff, and a runner-up finish to fellow Turf entrant Venezuelan Hug in the Nov. 21 Millions Turf Preview, also going 1 1/16 miles.

“He had a tough beat there. Then he had an injury, got over it and came back well,” Maker said. “We expect a big performance from him.”

Tyler Gaffalione rides Second Mate from Post 1 in a field of nine.

Max K.O. is a new addition to Maker’s barn, claimed on behalf of Michael Dubb for $50,000 out of a one-mile claiming event Dec. 13 at Gulfstream where he set the pace for six furlongs before tiring to be ninth. The 5-year-old horse, twice stakes-placed, also led for three-quarters in last year’s Turf.

“We claimed him with this race in mind,” Maker said. “We figured if we could ration some of his speed he’ll be a little more productive. He’s been running off in his races and if we can get him to settle, I think we’ve got a decent horse.”

Julien Leparoux, winner of the 2010 Turf with Jet Propulsion, gets the assignment on Max K.O. from Post 7.

Anne Scott’s 8-year-old gelding Galleon Mast is a six-time stakes winner with $659,080 in purse earnings racing in the Turf for the third consecutive year. He won it in 2018 then ran second in that year’s Grade 3 Canadian Turf and closed to be third by two lengths last winter. Most recently, he had his two-year win streak snapped when fifth in the Turf Preview.

Galleon Mast is trained by David Fawkes, who will also send out William Rainbow’s Over the Channel, a troubled sixth in the Dec. 5 Claiming Crown Emerald though beaten just two lengths. The 5-year-old Overanalyzed gelding has been third or better in nine of 13 career races, with five wins.

The Turf Preview was Venezuelan Hug’s fourth win in six starts since being claimed for $40,000 last spring by trainer Danny Gargan. A 4-year-old son of Constitution, Venezuelan Hug overcame a tough trip where he got bumped near the eighth pole last out and prevailed under a drive. Overwhelmed in the 1 1/4-mile Belmont Derby (G1) in October, he has won each of his last two races against state-breds.

Rancho Alegre’s Monforte has won six of his last eight starts including the 7 1/2-furlong Bear’s Den and one-mile Showing Up in back-to-back races last summer and fall at Gulfstream. The 4-year-old Carpe Diem colt took a short lead into the stretch of the Turf Preview last time out before fading to seventh.

Proven Strategies, a stakes winner over the Woodbine turf last out and second in the Pennine Ridge (G2) last summer; stakes-placed Shamrocket and Clear Destination also are entered.