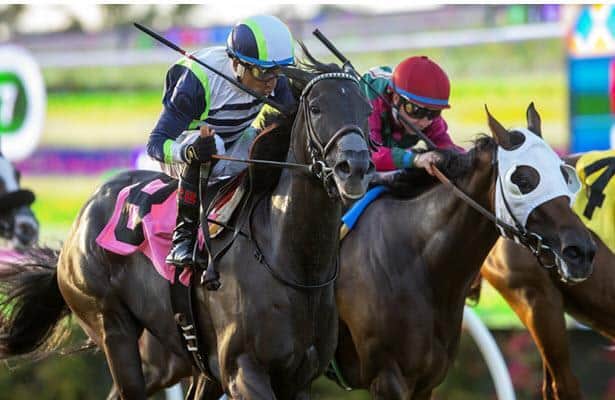 In a rousing finish, Lynne’s Legacy rallied from dead last to forge to the front in the final strides and win the featured $150,000 Solana Beach Stakes for California-bred fillies and mares Friday at Del Mar.

With Rafael Bejarano in the saddle, Lynne’s Legacy closed powerfully to win by a neck over 9-5 favored Pulpit Rider, with Don’t Sell third another head away and a nose in front of Mo See Cal.

However, the order of finish was revised by the board of stewards who posted the inquiry sign after the race. Upon viewing videotape, Pulpit Rider was disqualified from the runner-up spot for interfering with Fiery Lady in mid-stretch. Moved up to second was Don’t Sell, followed by Mo See Cal in third and A Walk in the Park in fourth as Pulpit Rider was demoted to sixth in the seven-horse field behind Fiery Lady.

Lynne's Legacy charged late down the center of the track to win the Solana Beach Stakes under @sambitoperu pic.twitter.com/VolBFUnkEC

“Good trip for her today,” Bejarano said. “I was glad to see the speed early; she wants to run from the back.”

Withdrawn from the one-mile contest on grass were Battleground State, Donut Girl and Sneaking Out.

Lynne’s Legacy is owned by Maureen Richardson of Danville, Ca., Richie Robershaw of San Diego and Terri Tucker of Santa Monica. Her trainer is Doug O’Neill.

“This filly is such an honest filly and she’ll run two miles if you asked her,” O'Neill said. “The trouble with the mile and a quarter and longer races is that there’s no pace to run at. So we thought in this mile race we’d get a good pace to run at, which we did. Hats off to Rafael (Bejarano), he won the race with a perfectly timed ride. It was a lot of fun to watch.”