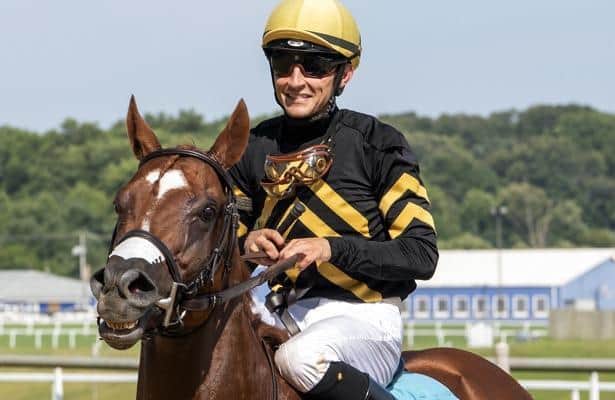 Largely ignored by bettors despite a powerful score in the Grade 3 Chick Lang Stakes on Preakness Day at Pimlico, Calumet Farm homebred Lexitonian returned to the Free State and struck again, riding the rail to an upset victory in the $75,000 Concern Stakes on Sunday at Laurel Park.

The Concern was one of five stakes races worth a combined $400,000 on Laurel’s Summer Sunday Stakes program.

Trained by Jack Sisterson at Keeneland and ridden by local jockey Sheldon Russell, the son of Speightstown shot right to the front from the No. 6 post when the gate opened, conceded the lead to Compound It and then moved to the front in tandem with Captain Von Trapp.

After gaining the lead at the eighth pole, Lexitonian had to hold off a relentless rally by 55-1 long shot Royal Urn to win by a neck.

Mind Control, the 3-5 favorite, found himself behind a wall of horses in deep stretch and finished third in the field of seven.

Sisterson, a former assistant to Doug O’Neill who was hired last year by Calumet to train privately, had run five horses at Arlington Park on Saturday.

He watched Lexitonian, a homebred son of Speightstown out of the Tap mare Riviera Romper, win the Concern while waiting for a flight back to Kentucky at Midway Airport.

“He ran such a good race at Pimlico, and we sort of liked the (Mid-Atlantic) region,” Sisterson said. “He shipped well at Pimlico, and Pimlico is close (to Laurel) and the timing worked out perfectly.”

Lexitonian tried Grade 1 company in the Woody Stephens on June 8 at Belmont Park and never got involved, finished 10th in a field of 11.

Sisterson said he couldn’t find anything wrong after the race, so “we penciled (the Concern) in if he came well out of the last race, and his last work was good at Keeneland.”

Sisterson put Lexitonian in the care of Laurel-based trainer Jeremiah O’Dwyer for the week leading up to the race and said he sent him up “full of confidence."

The victory was the third in seven career starts for Lexitonian.

Sisterson originally planned for Russell to take Lexitonian off the pace, but when two horses scratched, he decided to change tactics and stay closer to the pace.

“I said to Sheldon’s agent we were going to take back because I thought there would be a lot of speed, but I said, ‘You know, what about putting him on the lead?’” Sisterson said. “He will fight to the wire. I think credit to Sheldon Russell. That’s what good jockey’s do.”

Russell said, “On Preakness Day, he showed he wanted every inch of six furlongs, so I knew the extra furlong could only help him.”