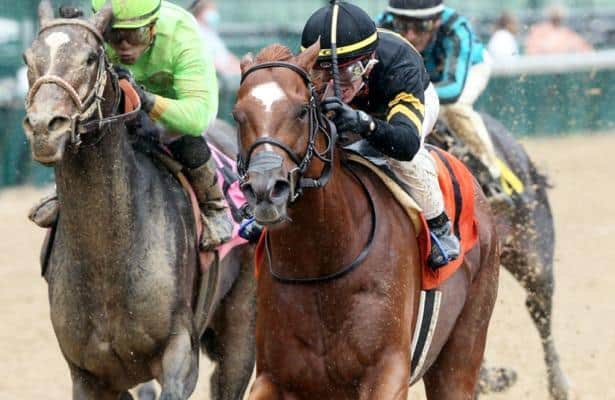 Trained by Jack Sisterson and ridden by Tyler Gaffalione, Lexitonian ran seven furlongs in 1:22.29 over a fast track in rainy conditions to collect his fourth win in 12 career starts. He paid $25.80 to win at odds of 11-1 and the $48,868 winner’s share of the purse boosted his career earnings to $306,882.

“He ran a huge race,” Gaffalione said. “When he felt the horses coming up from behind him, he dug in and really finished strong down the lane.”

Rare Form and Absolutely Aiden led the way in the class-laden field of 12 older horses through early quarter-mile splits of :22.28 and :44.73 with Lexitonian chasing just behind while in the clear from third.

Absolutely Aiden poked his head in front around the turn but was quickly met by Lexitonian off the turn.

Hog Creek Hustle, winner of the Woody Stephens (G1) on the Belmont Stakes undercard last year, was unhurried early and commenced a wide late charge in the stretch but it was too late to catch Lexitonian, who inched clear and held sway for the victory.

“We really thought he was a winner turning for him,” Hog Creek Hustle’s trainer Vickie Foley said. “He ran a solid race. We just got beat.”

Lexitonian, a son of 2004 Breeders’ Cup Sprint winner Speightstown, won two stakes last year as a 3-year-old – the Chick Lang (G3) on the Preakness undercard and Concern at Laurel – and finished third against elders behind Engage and Whitmore in the Phoenix (G2) at Keeneland.