Come Dancing to do some 'home cooking' in Belmont return 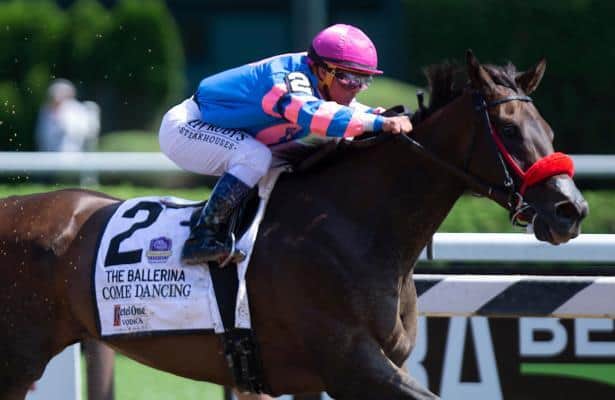 The 6-year-old Malibu Moon mare won four of six starts in 2019 for Martin, including scores in the Ballerina (G1) at Saratoga; the Ruffian (G2) and Gallant Bloom (G2) at Belmont Park; and the Distaff (G3) at Aqueduct.

Come Dancing was prepared for her Apple Blossom effort by D. Wayne Lukas, after which Martin said the talented dark bay was given some time to recuperate before returning to Belmont Park last week.

"We gave her a little respite with Bruce Jackson at Fair Hill Training Center in Maryland and she was able to hang out there and ride the trails and graze," said Martin. "Fair Hill is like heaven for horses and she was able to enjoy a pit stop there for almost three weeks."

Martin said the freshening has suited Come Dancing, who will be pointed to the Grade 3, $100,000 Vagrancy Handicap, a 6 ½-furlong sprint for older fillies and mares slated for June 27 at Belmont.

"She came back five days ago and looks healthy and sound. Bruce did a great job with her," said Martin. "We'll look to give her two or three works before the Vagrancy. We'll have to see how the schedule plays out. She's galloping well right now and is getting back into her routine. She seems like a happy filly."

Florent Geroux was aboard for the last-out route attempt in the Apple Blossom. In New York, Martin said he will look to reunite Come Dancing with Hall of Famer Javier Castellano, who was aboard for the Ballerina and Gallant Bloom scores.

"We'll get her back to sprinting with Javier and a little home cooking. The Vagrancy is my goal," said Martin. "It was an ambitious spot and she had a lot thrown at her for that race [in the Apple Blossom]. Coming back now, I think having her fresh and happy we'll hopefully see the same old Come Dancing.

"She loves Belmont," continued Martin. "She's had great success there with the Gallant Bloom and the Ruffian last year. I definitely believe in horses for courses."