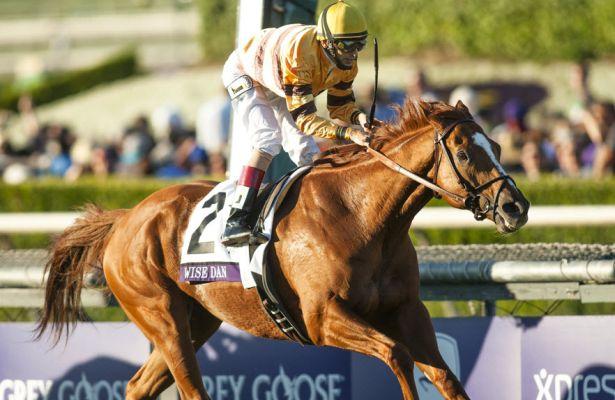 The great gelding Wise Dan had a habit of making the amazing — the brilliant — appear as easy as strolling in the park. Since the creation of the Eclipse Awards in 1971, only three horses have managed to win six or more championship titles. Forego nabbed eight honors. John Henry took seven. And Wise Dan claimed six during his Hall of Fame career, including Horse of the Year honors in 2012 and 2013.

Though he was a graded stakes winner on dirt, turf and synthetic, over distances ranging from 6 furlongs to 1 1/8 miles, Wise Dan was a turf miler at heart. Never was the sensational chestnut more comfortable — or more spectacular — than when utilizing his uncommon blend of speed and stamina to blaze a mile over firm turf. Or soft turf, for that matter. With 23 wins from 31 starts, plus earnings of $7,552,920, it’s clear Wise Dan wasn’t particularly picky.

Between 2010 and 2014, Wise Dan took owner Morton Fink, trainer Charlie LoPresti, and countless racing fans on an unforgettable ride. Attempting to single out his greatest performance is like trying to pick a favorite song — there are too many to choose from. Certainly his 10 1/4-length romp in the Grade 3 2012 Ben Ali was breathtaking. His tenacious rally through tight quarters and a blinding rainstorm to win the 2013 Firecracker Handicap (G2) was heart-pounding. And his back-to-back wins in the 2012-13 Breeders’ Cup Mile defined his career.

Yet one can argue Wise Dan’s single most brilliant performance came in the 2013 Woodbine Mile (G1). It wasn’t his most significant triumph or his fastest on the speed figure scales. But the effortless manner in which Wise Dan beat a quality field in blazing time was a testament to his rare talent.

From start to finish, Wise Dan exuded power and authority. As long shots Dimension and Excaper sprinted to the front through increasingly testing fractions of :23.15, :45.44, and 1:08.50, Wise Dan reluctantly settled into third place under regular rider John Velazquez. Favored at 1-4 — and with $617,584 of the $685,361 in show wagers riding on his back — Wise Dan was eager to run, begging for an opportunity to swoop past the pacesetters.

Dimension and Excaper were hardly slouches. The former entered fresh off a victory in Woodbine’s Play the King Stakes (G2), and the latter had finished second in the 2011 Breeders’ Cup Juvenile Turf (G1). But Wise Dan seemed to have them measured every step of the way, edging close without encouragement from Velazquez as the field swung around the turn.

At the top of the stretch — with Wise Dan absolutely full of run and poised to strike — Velazquez took a peek under his shoulder. Was there any competition coming? Wise Dan was strolling to the front, and Velazquez hadn’t even moved yet. The rider took another peek back as Wise Dan opened a clear advantage; no, there was no one coming.

Finally Velazquez asked Wise Dan to accelerate, giving his mount the slightest of hand rides seemingly out of formality more than necessity. Twice more, Velazquez looked back, but there was no need; all he saw were the rapidly diminishing forms of Wise Dan’s overmatched rivals, falling farther and farther behind as the reigning Horse of the Year surged home with powerful strides.

From all appearances, Wise Dan never hit top gear down the Woodbine homestretch. There’s no telling the margin of victory he might have recorded had Velazquez encouraged him to run his fastest. Yet despite the effortless nature of Wise Dan’s performance, he sprinted the final quarter-mile in a rapid :23.25 to complete the race in 1:31.75, setting a course record that stands seven years later.

No one could remotely challenge Wise Dan down the lane. Two-time graded stakes winner and future Breeders’ Cup Mile runner-up Za Approval came closest, but he was still 3 1/2 lengths behind at the finish line. Group 2 winner and future 2014 Woodbine Mile winner Trade Storm finished even farther back in third place, followed by three-time graded stakes winner Riding the Rails. Dimension and Excaper weakened to trail the field, burned up by the intensity of being chased by Wise Dan.

“The things he’s done are incredible,” Velazquez said in a story The Blood-Horse after the race. “He broke well, and I put him right behind the other two horses, and he got rank with me. (I wanted him) to come off the bridle a little bit. Once he did that, I waited until the five-sixteenths pole and let him ease out from those two horses, and as soon as he saw daylight, he went on.”

But it was LoPresti who best summed up the moment in understated fashion: “I feel like we’ve got a great horse.”

If it wasn’t already clear at the time, it’s certainly obvious looking back seven years later. Wise Dan wasn’t just a rare talent — he was one of the greats.

Keeler Johnson is a writer, videographer, handicapper, and all-around horse racing enthusiast. A great fan of racing history, he considers Dr. Fager to be the greatest racehorse ever produced in America, but counts Zenyatta as his all-time favorite. You can follow him on Twitter at @J_Keelerman.