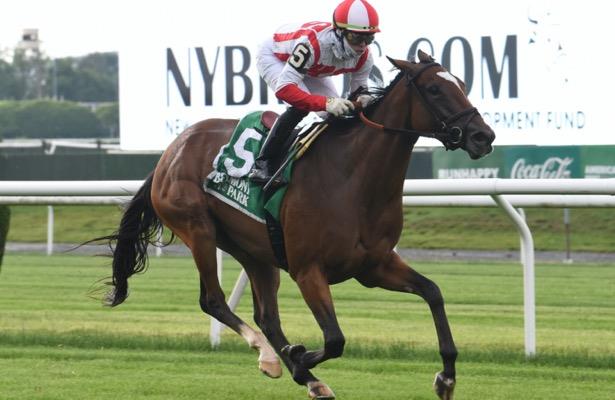 This weekend is what dreams are made of for racing fans. Santa Anita Park offers four stakes races on Saturday and Sunday, while Belmont will be busy with eight. Pimlico, which normally is very quiet this time of year, will put on 11 stakes races on Preakness Saturday.

Even with all this great stakes action across the country, the epicenter of it all could be in Lexington, Ky. Keeneland offers eight stakes on Saturday and Sunday, with every one serving as a major Breeders' Cup prep. As contenders try to get in a race over the Breeders' Cup surface, the probables for Keeneland's stakes this week have come up so strong that they resemble a mini Breeders' Cup.

Here is an early look at the probables for each stakes race at Keeneland this weekend.

This race is so loaded that defending champion Bowie's Hero is not likely to be among the top 5 choices in wagering. Todd Pletcher's Halladay leads the field after winning the Fourstardave (G1) in impressive fashion last out. Analyze It is one of four Chad Brown probables in this spot, and he may be the most interesting of the quartet. Analyze It was third in last year's Breeders' Cup Mile and won the Red Bank (G3) at Monmouth last out in a useful prep off a layoff. Brown's Flavius, winner of the Tourist Mile last out, offers good upside, while Raging Bull and Without Parole are always capable on their best days.

G1, $500,000, 2-year-olds, 1 1-16 miles on dirt
The Breeders' Futurity offers a glimpse into the future stars of the sport. Founder, Calibrate and Essential Quality all were ultra-impressive winning on debut with differing styles and are on a collision course here. The winner of this race likely will be the second choice in the Breeders' Cup Juvenile behind Hopeful winner Jackie's Warrior.

Uni, last year's top miler, will look to find her best form after a pair of disappointing efforts in a row. It will not be easy as she will run into her speedy and talented stablemate Newspaperofrecord. Newspaperofrecord was considered the likely favorite for the Breeders' Cup Mile before getting run down by Beau Recall last out at Churchill Downs. Beau Recall is back for more in this spot. These three ladies are leading Breeders' Cup contenders even if they choose to run in the Mile and face males.

The TCA has proven to be a key Breeders' Cup prep in the past, with multiple long-shot winners coming from this race. This year's field looks wide open with Jerry Hollendorfer's Sneaking Out leading the way after her victory in the Rancho Bernardo. Danny Gargan's Lady's Island is dangerous on the front end, and recent allowance winners Inthemidstofbiz, Palace Avenger and Dos Vinos all offer strong upside.

Leinster has emerged as a leader in this wide-open turf sprint division. He was victorious over this course in the Shakertown and will look to keep the likes of Extravagant Kid, Chaos Theory and Totally Boss at bay in this spot.

It would have been fascinating to see Midnight Bisou take on the Kentucky Oaks winner Shedaresthedevil, but news broke Monday that Midnight Bisou is likely to skip the Spinster after looking off after a workout. Her absence would leave this race wide open. Ollie's Candy, who always shows up with a strong effort; Vexatious, who defeated Midnight Bisou in the Personal Ensign; and Lady Kate, who ran second to Monomoy Girl in the La Troienne, add intrigue to this field.

It is interesting to see Mutasaabeq, who was highly thought of after a smashing debut win, listed as a probable in the Bourbon on the turf rather than the Breeders' Futurity on dirt.  Matasaabeq finished a distant third in the Hopeful and has some turf in his pedigree to lean on.  He would take on a slew of established turf stakes runners, including Big Fish, Outadore and Barrister Tom.

In a 2-year-old turf sprint, it is no surprise to see that Wesley Ward has the field surrounded. He has four out of the six probables in here, led by the very impressive Golden Pal. He just missed scoring in Ascot before smashing his competition in Saratoga's Skidmore. He will be very tough in here.