Grade 1 winner Come Dancing gets back to sprinting in Vagrancy 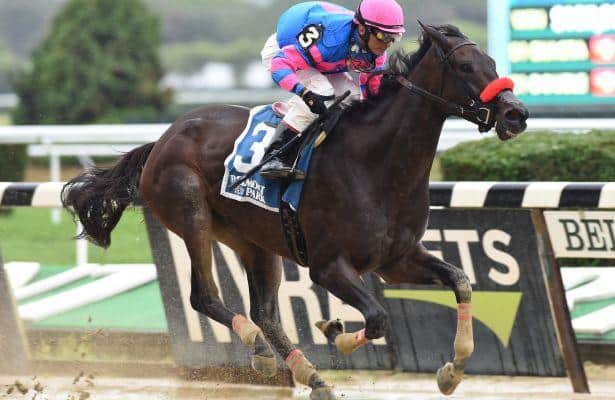 Trained by Carlos Martin, the 6-year-old Malibu Moon mare will look to rebound after a rare off-the-board performance last out in an ambitious spot going two turns in the 1 1/16-mile Grade 1 Apple Blossom on April 18 at Oaklawn Park.

Come Dancing now returns to sprinting, where she excelled in 2019, highlighted by a dramatic come-from-behind win in the Grade 1 Ballerina in August at Saratoga Race Course. At the Spa, she was left at the break but rallied under Hall of Fame jockey Javier Castellano, posting a 3 ½-length score in the seven-furlong sprint.

That was part of a stellar season for the millionaire Come Dancing, who won 4-of-6 starts in 2019 for Martin, including Grade 2 wins in the Ruffian and Gallant Bloom, both at Belmont Park; and the Grade 3 Distaff at Aqueduct.

Come Dancing was prepared for her Apple Blossom effort by Hall of Famer D. Wayne Lukas, after which Martin said the talented dark bay was given some time to recuperate before returning to Belmont Park in May.

Castellano, who also rode Come Dancing to victory in the 6 1/2-furlong Gallant Bloom last September at Belmont Park in an off-the-board finish in the Breeders' Cup Filly and Mare Sprint in November at Santa Anita Park, gets the call on Come Dancing again on Saturday, breaking from post 5.

"Javier is one of top jockeys in the world and brings in a lot of experience, that's for sure," Martin said. "There are certain riders like Javier who are just winners. There are great riders all over the country, but in New York, we have the best in the world."

Come Dancing enters Saturday with a month of solid works, fortified by two recent bullet workouts on the main track at Belmont: on June 15, going five furlongs in 57.94 seconds and on June 8, going a half-mile in 47 flat.

"We wanted to just keep her fresh," Martin said. "It didn't look like she was out of a canter. She was just so smooth. It's just one of those things where the track is extremely fast and she came out of it great."

Lael Stables' 6-year-old Chalon, a winner of seven of 18 career starts, will make her 2020 debut. In her last start, going six furlongs in October at Keeneland, the Dialed In mare finished off the board. Trained by Arnaud Delacour, she will leave from post 3 with Jose Ortiz aboard.

Also looking for redemption is Gainesway Stable's Mother Mother, trained by Hall of Famer Bob Baffert, who last out on June 5 at Belmont Park finished a disappointing fourth in a 6 ½ furlong sprint. One of the youngsters in the field, the 4-year-old has three victories in 13 career starts. The Pioneer of the Nile filly will be ridden by Joel Rosario from post 2.

Looking for redemption in the Vagrancy will be First Row Partners and Parkland Thoroughbreds' Royal Charlotte, who finished three-quarters of a length back to Honey I'm Good in a runner-up effort in the six-furlong Harmony Lodge on June 5 at Belmont Park in her seasonal bow.

"I wish I had a little more time," said trainer Chad Brown. "I felt she could've won if she would've gone more to the outside on that wet track. It was a good prep for her."

Royal Charlotte has five wins in eight career starts, including four consecutively in 2019 when she dominated races from 6-to-6 ½ furlongs, capped last July 4 by a convincing four-length win in the 6 ½-furlong Grade Victory Ride on the July 5 Stars and Stripes Day card at Belmont.

Irad Ortiz, Jr. will be aboard Royal Charlotte Saturday, drawing the inside post.

The Vagrancy is named for the bay mare out of Valkyr by Man o' War, who in 1942 was Champion 3-Year-Old Filly and also the Champion Handicap Mare.

Bred and owned by Belair Stud and trained for most of her career by the legendary "Sunny" Jim Fitzsimmons, Vagrancy enjoyed a season for the ages in 1942, winning nine stakes races that included the Coaching Club American Oaks, the Pimlico Oaks, the Delaware Oaks, the Alabama, Gazelle and Test against other 3-year-olds, and the Beldame Handicap and Ladies Handicap against older fillies and mares.

Vagrancy raced 42 times in her career, hitting the board in 31 of her starts.