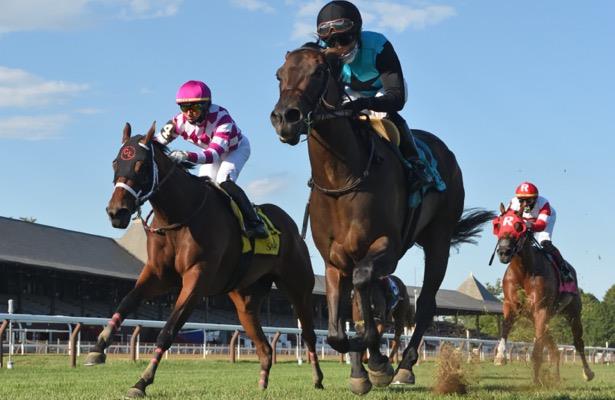 Ghislaine Head's homebred She's My Type, unlucky in her previous three starts, was the beneficiary of a timely opening in mid-stretch and shot through with a desperate late surge to keep the hottest jockey-trainer combination on the grounds ablaze in Friday's $100,000 Coronation Cup at Saratoga Race Course.

It was the third win of the day for jockey Joel Rosario and second for meet-leading trainer Christophe Clement, who teamed up to take the race immediately preceding the Coronation Cup, a 5½-furlong sprint for 3-year-old fillies on the Mellon turf course.

Together, Rosario and Clement have gone 10-3-3 in 23 starts this summer and have won four stakes, including the Grade 2 Lake Placid with Speaktomeofsummer, National Museum of Racing and Hall of Fame (G2) with Decorated Invader and Wednesday's inaugural Dayatthespa with Classic Lady.

"She has a very good turn of foot. When she had the chance to finish, I thought she ran very well."

Rosario settled She's My Type in mid-pack as Shippy emerged from a three-way battle up front with the lead following a quarter-mile in 21.74 seconds tracked by Bredenbury to her outside and 9-5 favorite Artie's Princess in the clear in third.

She's My Type was still behind horses as the group rounded the far turn, with Shippy taking them through a half-mile in 44.25 seconds. Rosario moved his mount up to launch a bid once straightened for home but had to check briefly when Artie's Princess lugged inward and bumped Bredenbury approaching the eighth pole. Rosario was able to regain momentum when Artie's Princess drifted back out and had plenty of room to split Shippy along the rail and a late-running Miss J McKay to win by a half-length in 1:01.67 over the firm going.

"There was a lot of pace and I was just waiting for the right time to move,” Rosario said. “She was there for me the whole time on the bridle and it was just a matter of waiting to make the last run.

“When I turned for home, I worked my way to the middle and a horse came over and made it tight for me, so I was worried a little bit there. But we got the jump and then after that I had only one horse to beat and she was getting there and getting there and got it done. It was a very good performance from her."

Miss J McKay rallied from dead last to be second, three-quarters of a length ahead of Shippy, with Artie's Princess another 1¾ lengths back, followed by Fly So Pretty, Lexi On the Move and Bredenbury. After a steward's inquiry and an objection from jockey Luis Saez, Artie's Princess was disqualified for interference and placed last, behind Bredenbury.

Sent off at 4-1, the French-bred She's My Type returned $10.40 for a $2 win bet. It was her third career win and second in a stakes, following the 7½-furlong Ginger Brew in January at Gulfstream Park. Since then, she was fourth by 1½ lengths in the Grade 3 Sweetest Chant and third by three-quarters in the Sanibel Island, also at Gulfstream, before running second, beaten 1¼ lengths, by Bredenbury in the six-furlong Lady Shipman on June 21 at Belmont Park, her first race in three months.

Clement leads the Saratoga standings with 13 wins while Rosario sits second among riders with 19, one behind Jose Ortiz.

"When you train in New York, you are very lucky,” Clement said. “We have a great jocks colony up here. I like Joel a lot and he's doing great at the moment."

"I have to thank Mr. Clement for the opportunity,” Rosario said. “I'm riding horses that have chances to win races thanks to him and his team.

"When you win you get confidence, but I think I've been fortunate to be riding horses with a good chance to win."

Live racing returns Saturday to Saratoga with a spectacular 12-race Whitney Day program featuring five stakes - four graded - worth $2 million in purses led by the $750,000 Whitney (G1) for 4-year-olds and up going 1 1/8 miles in Race 9 at 5:42 p.m. The Whitney is a "Win and You're In" qualifier for the Breeders' Cup Classic in November at Keeneland.