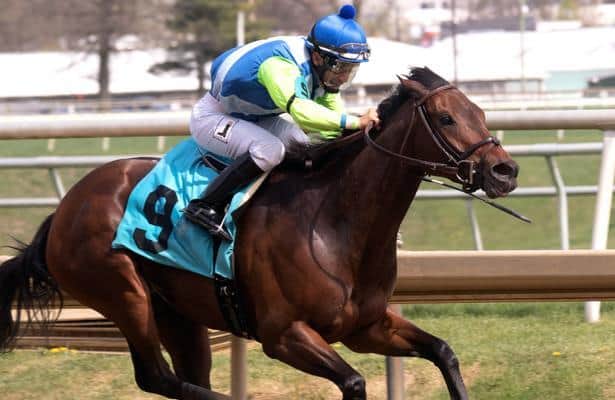 Lael Stables' Chalon was was slated to make her 2020 debut in the $80,000 Harmony Lodge on Friday, June 5 at Belmont Park. With rain preventing a fast track, trainer Arnaud Delacour instead chose to extend her layoff a few more weeks, resulting in her entry in Saturday's Grade 3, $100,000 Vagrancy for fillies and mares 3 years old and up.

Contested at 6 1/2 furlongs over Belmont's Big Sandy, the 70th running of the Vagrancy will mark Chalon's first start since a fourth-place effort in the Thoroughbred Club of America (G2) on Oct. 5 at Keeneland.

"I'm very happy with her. I think she's been training great," Delacour said. "She was in three weeks ago but we had a lot of rain and I didn't want to bring her back on a sloppy track, so we passed on the race. She breezed twice since and I've been very happy."

Chalon has registered six of her seven career wins on fast tracks, going 6-6-1 in 16 starts on the surface as part of a 18-7-7-1 overall record. Getting ready to make her first start as a 6-year-old, the Dialed In mare will be running at Belmont for the first time since finishing second to Separationofpowers in the Bed o'Roses (G3) in June 2019.

A five-time stakes winner, Chalon has a propensity to start campaigns with wins, accomplishing the feat in her debut as a juvenile in 2016 and also winning both her 4-and-5-year-old debuts.

"I thought she was ready the last time but could have used another breeze or two. I'm pretty happy we got the extra three weeks, and she looks great heading into the race," Delacour said.

Chalon drew post 3 in the seven-horse Vagrancy, carded as Race 7 with a 4:32 p.m. post time. She is the 5-2 second choice behind 7-5 favorite Come Dancing, who drew post 5. Other contenders include Mother Mother [4-1] and Royal Charlotte [7-2].

"It's not an easy spot, and we respect the competition," Delacour said. "Come Dancing is the class of the race, but I'm very happy with Chalon. I think a [fast track] will help. I didn't want to try to do anything different. It looks like the weather should be OK. Hopefully, we can see her on a good day.

"She's very versatile. She just does her thing. I just hope for a good break and whatever happens, happens."

Jockey Jose Ortiz will ride Chalon for the first time. Paco Lopez was in the irons in her last two starts, including a win in the Roamin Rachel in September at Parx.

"She's pretty fast. I'll leave it up to Jose, and I'm happy with the third post," said Delacour.

Gamine garnered all the headlines for that race, when she romped the seven-horse field of sophomore fillies by 18 3/4 lengths in the fastest-ever Acorn in 1:32.55.

Lucrezia, a two-time stakes winner, was coming off a runner-up effort in her graded stakes debut in the Grade 2 Gulfstream Park Oaks in March. Stepping up to a prestigious Grade 1, she stalked Gamine through the opening-quarter mile in 22.48 seconds before falling back, eventually finishing behind Pleasant Orb and Water White to just miss out on more black type.

After starting her career with a second-place effort in a six-furlong sprint on Oct. 5 at Keeneland, Lucrezia ran on turf in her next two starts, posting a two-length win at 5 1/2 furlongs on Oct.

23 before running fifth in the six-furlong Stewart Manor on Nov. 10 at Aqueduct Racetrack.

Delacour moved the Kentucky homebred back to dirt for her next four starts but left open the possibility of a return to grass for her next spot.

"We haven't ruled out running back on the turf," Delacour said. "She broke her maiden [there] and got a pretty good number doing so. I wouldn't rule out going a mile or so on the turf for her."