By My Standards takes another shot at Tom's d'Etat 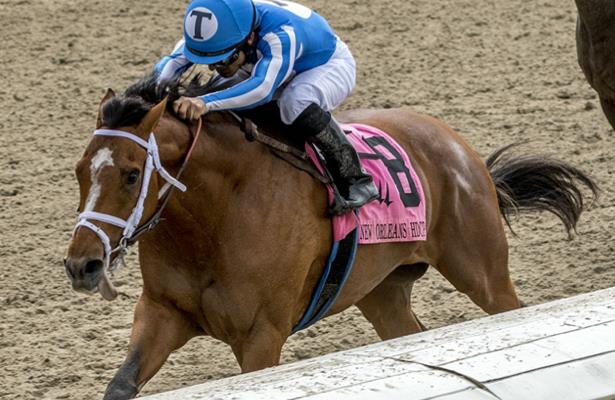 Allied Racing Stables' Chester Thomas will celebrate his first starter at Saratoga Race Course when By My Standards bursts from the gate as one of five millionaires in Saturday's Grade 1, $750,000 Whitney, a 1 1/8-mile test for 4-year-olds and upward.

Whitney Day will feature three Grade 1 events, led by the historic Whitney, with an automatic berth to the Breeders' Cup Classic on Nov. 7 at Keeneland on the line. The card is bolstered by the $500,000 Personal Ensign (G1), a "Win and You're In" qualifier for the Breeders' Cup Distaff in November; and the $300,000 H. Allen Jerkens Memorial (G1) for 3-year-olds sprinting seven furlongs. The stakes-laden card also includes the $250,000 Bowling Green (G2) for 4-year-olds and up on the turf and the $200,000 Caress, a 5½-furlong turf sprint for older fillies and mares. The card will be broadcast on Saratoga Live beginning at 1 p.m. Eastern on FOX Sports and MSG Networks.

Trained by Bret Calhoun, the son of leading third-crop sire Goldencents has already given Thomas a couple of "firsts" in providing the Kentucky native with a first graded stakes win in the Louisiana Derby (G2) last March at Fair Grounds, which propelled him to the Kentucky Derby  Thomas' first starter in the Run for the Roses – where he was elevated to 11th.

By My Standards arrives at the Whitney off a runner-up effort to Toms d'Etat, the Whitney's 6-5 morning line favorite, in the Stephen Foster (G2) on June 27 at Churchill Downs where he tracked the pace but was unable to catch the leader, who set a tepid pace under Miguel Mena.

"Our horse came out of the race very well," Thomas said. "He kept his weight up and we're competitive and we like to win, but these races aren't easy. Toms d'Etat ran a huge race at Churchill. I give Miguel Mena a lot of credit, he took control of the race right out of the gate. The fractions were fairly slow at the beginning, and you aren't chasing a horse like that down with those kinds of fractions. Coming in second is not bad, so we're looking forward to trying again."

Following the Kentucky Derby, By My Standards received a freshening but returned with a six-length optional claiming victory at Fair Grounds which he followed up with Grade 2 scores in the New Orleans Classic and Oaklawn Handicap.

"He's by far better than he was last year,” Thomas said. “He was coming into himself very well.

"The Louisiana Derby shocked everybody, and we thought he had a real shot in the race back then. The Derby was hard on him and we gave him all the time off he needed. He got his foot issues squared away and Bret has been meticulous with everything he's done."

"The races haven't gotten any easier, especially the Oaklawn Handicap,” Thomas said. “That was a stacked race.

"We're excited to be a part of it and hopefully we can get our first Saratoga win."

"Bret has done just a beautiful job,” Thomas said. “The horse has come back and is doing really well.

"No doubt this is a very tough race even with only five horses. They're all very, very good horses. Code of Honor is clearly a super horse. Toms d'Etat is a super horse, so it's going to take a super horse to win that race Saturday."

Thomas could double up his Saratoga starters with Mr. Big News, who is a possibility for the $500,000 Saratoga Derby, part of the Turf Triple Series for 3-year-olds at 1 3/16 miles Aug. 15.

"His pedigree screams turf," Thomas said of the sophomore son of Giant's Causeway, who won the Oaklawn Stakes two starts back. "In the Blue Grass, he stumbled out of the gate and the track was speed-biased. It might be a good time to look at turf racing with him."

Bred in Kentucky by Don Alberto Corporation, Mr. Big News is out of the Galileo mare Unappeased, who is a half to multiple graded stakes winner on grass Sligo Bay.