Breeders' Cup F&M Sprint 2020: Who are the fastest contenders? 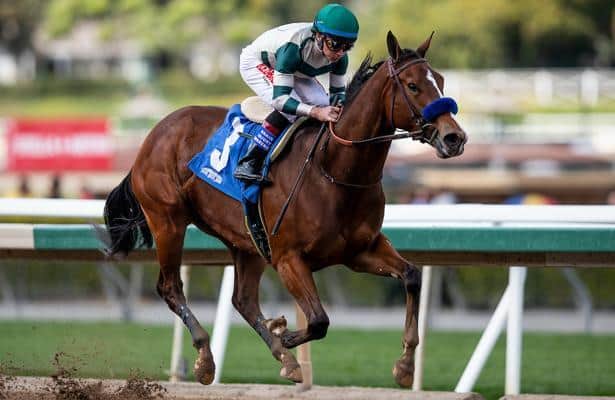 Gamine has been the darling of speed figure players all summer as she racked up numbers that were impressive for anyone, never mind a 3-year-old filly.

She will face a tough field of older fillies and mares in the Breeders' Cup Filly and Mare Sprint, and many top contenders are not as far behind Gamine as one would imagine. Below we take a look at the Beyer, Brisnet and Timeform figures for this year's F&M Sprint probables.

Who is the fastest: Remarkably, Gamine does not have the highest career Beyer, Brisnet or Timeform figure, but she has consistently been the fastest in recent one-turn races this year. Come Dancing's back-class shows, but she needs to improve on her recent numbers to contend. Timeform loves Serengeti Empress' last race, in which she received a tremendous 130 figure.

One thing that stands out: It is incredible how similar these runners are on the Beyer Speed Figure scale if one looks at only their last start. All eight of the top choices received a Beyer between 95 and 97 last out.

[Related: Prospective odds and fields for all 14 Breeders' Cup races]

Odds and accomplishments for the 2020 F&M Sprint runners:

• Simon Callaghan confirmed that Bellafina will be one of his three Breeders' Cup starters.

• Frank's Rockette was listed among the six horses that Bill Mott confirmed to HRN for the Breeders' Cup. She will start in either the F&M Sprint or the Sprint.

• Venetian Harbor's connections indicated after the Raven Run that their filly would be pointed towards the F&M Sprint.

• Mia Mischief has not recorded a work since Aug. 30 and has been removed from F&M Sprint consideration.

•  On Sept. 21, HRN reported that Chad Brown's three-time G1 winner Guarana would need to work soon to be considered for the Breeders' Cup. She still has not worked, with her last drill coming on July 25. She has been removed from consideration for the F&M Sprint.

• Michael McCarthy told HRN that Ce Ce and Speech will be headed to the Breeders' Cup. Ce Ce has since been confirmed for the Distaff. Speech could go in either spot.

• John Shirreffs told HRN that Hard Not to Love is possible for the Distaff. “Her last race was really good,” Shirreffs said. “She could go to the seven-eighths race (Filly & Mare Sprint) or go to the Distaff.”

• Spiced Perfection, who has not been seen since running sixth in the Winning Colors on May 30, was not mentioned by trainer Mark Casse as one of his Breeders' Cup starters.

Who could be going: Ce Ce, Hard Not to Love, Sneaking Out, Sally's Curlin, Frank's Rockette

Derby Radar: The Great One romps at Santa Anita; Fenway last
Back in with maidens after being beaten just a nos...