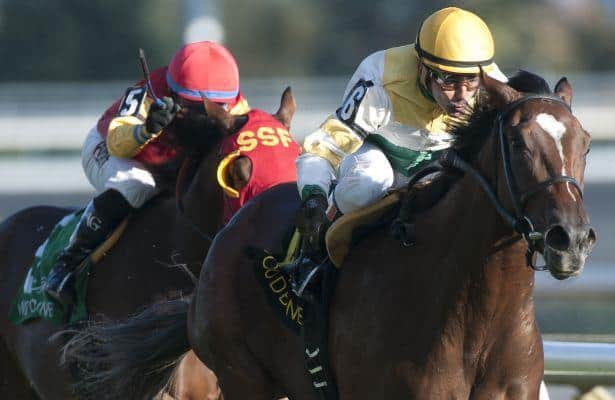 Photo: Michael Burns Photography
Chiefswood Stable's homebred Tiz a Slam will look to add to his impressive credentials when he travels to Aqueduct for the first time for the Grade 3, $200,000 Red Smith, a 1 3/8-mile turf test set for Saturday, Nov. 23 on the inner turf.
Trained by Hall of Famer Roger Attfield, the 5-year-old multiple graded-stakes winning Tiznow bay boasts a record of 9-3-1 from 27 starts with purse earnings of $985,953. The classy Ontario-bred has notched six career graded stakes wins.
Tiz a Slam traveled his talents in May 2019 to Churchill Downs where he made all the running to win the Louisville (G3) at 1 1/2-miles on a firm turf. He then returned to Woodbine where he captured the Singspiel (G3) and Nijinsky (G2), both at 12 furlongs, on the E.P. Taylor Turf Course.
Last out, Tiz a Slam finished fourth in the Northern Dancer (G1) at Woodbine on September 14 and needed some time off that required him to miss the Canadian International (G1) on October 12. He has since posted five works at Woodbine, including a trio of bullet breezes on the Tapeta main track. On Sunday morning, he covered five furlongs in 1:00.20 under jockey Steve Bahen, who will retain the mount on Saturday.
"We had to miss the International. He had a little bit of a cough at the time," said Attfield over the phone from Payson Park. "He's been doing that [bullet works] on his own without company, which he wouldn't have been able to do in his younger years. He worked this morning and Stevie called me and said he went very well and everyone was happy."
Tiz a Slam made the grade as a sophomore in the 2017 Ontario Derby (G3) on the Woodbine synthetic and added another Woodbine main track score in the 2018 renewal of the Dominion Day (G3). The versatile Tiz a Slam then captured the 2018 Nijinsky (G2) on the Woodbine grass  to pick up his first turf graded stakes.
Attfield said the sizable Tiz a Slam needed time to grow into his formidable frame.
"He's a big horse and he's just mature now," said Attfield, who will saddle his fourth Red Smith starter having previously competed with Danish Dynaformer [2nd, 2016], Simmard [5th, 2010] and Spice Route [3rd, 2009]. "A lot of those bigger horses don't mature until the end of their 4-year-old year and I think he's fully matured now. We looked after him well in his early life, so he's a very sound horse.
"He was a very uncoordinated young horse altogether. I think he's just at his best right now," continued Attfield. "I didn't think I'd even run him as a 2-year-old with the size of him, but as long as he got into races where he didn't get checked or steadied and got into that big stride of his, he was very effective. But he couldn't really play and jump and buck without half stumbling and falling over. He was just a big, gangly horse. But now, he can move and he's showing a lot more speed now than he had before too. He's a really nice horse."
Tiz a Slam's three wins this season have all come with front-running efforts, but Attfield said he doesn't necessarily need the lead.
"He shows more speed now and quite often finds himself on the lead, which is fine," said Attfield. "If he had to sit off a horse it would be okay as long as he keeps that rhythm going."
The versatile Tiz a Slam boasts graded wins on turf and synthetic, and Attfield said, with an eye to a potential stud career, that the well-related bay might be able to transition his turn of foot to dirt. He made one start on dirt when fifth in the Prince of Wales at Fort Erie, second leg of the Canadian Triple Crown, as a 3-year-old.

"I'm interested to see now that he's traveling in a different manner how he handles the dirt," said Attfield. "I'll monitor that this winter at Payson. I'd love to see him run well on the dirt."