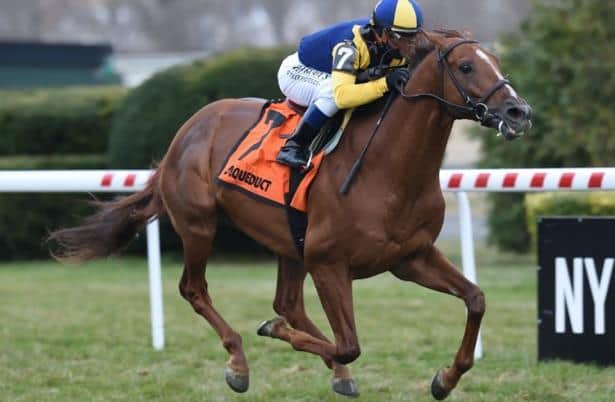 Known as the Edgemere Handicap until 1981, the Red Smith pays tribute to the late Pulitzer Prize winning author and sportswriter Walter Wellesley “Red” Smith, whose 55-year career in journalism covered a wide array of sports, including horse racing, for the New York Herald Tribune and The New York Times.

Trained by Tom Albertrani, Sadler's Joy has amassed the highest amount of lifetime earnings in the field, with $2,648,160 through a record of 33: 7-4-11, including four graded stakes triumphs.

The veteran son of Kitten’s Joy notched graded wins during his 4-, 5- and 6-year-old campaigns. In addition to last year’s Red Smith, Sadler’s Joy boasts triumphs in the Sword Dancer Invitational (G1) in August 2017 at Saratoga and Gulfstream Park’s Pan American (G2) in April 2017 and the Mac Diarmida (G2) in March 2018.

Sadler’s Joy arrives off a stellar performance with a third-place finish in the Joe Hirsch Turf Classic (G1) at Belmont Park, marking the third straight year he rounded out the trifecta in the 1 1/2-mile event. Last out, Sadler’s Joy took back along the hedge from his inside post, was tipped to the outside approaching the far turn, was in winning position at the top of the stretch, but was unable to catch pacesetter Channel Maker, finishing 2 3/4 lengths behind the subsequent third-place finisher of the Breeders’ Cup Turf.

Albertrani, who sent Sadler’s Joy out for his career debut in May 2016, said not much has changed with the hard-knocking old war horse other than his physical demeanor.

“He’s gotten bigger and stronger since three,” said Albertrani, who also sends out German-bred Tintoretto (post 6, Junior Alvarado). “There’s been no real change in the way he behaves around the barn, though. You wouldn’t even know his age.”

In addition to four graded stakes victories, Sadler’s Joy has finished in the money against Grade 1 company ten times, including a third-place finish in the Breeders’ Cup Turf in 2018, where he finished 9 3/4 lengths behind international superstars Enable and Magical. Seeking his first triumph of his 7-year-old campaign, Sadler’s Joy crossed the wire first in the Bowling Green (G2) on Aug. 1 at Saratoga but was disqualified to fourth.

“He’s run some big races and was so close in some of the bigger races,” Albertrani said. “I think one of the biggest disappointments was at Saratoga when he was disqualified. He’s just always consistently always been right there. The horse just always shows up.”

Joel Rosario will ride Sadler's Joy from post No. 4.

Trained by Mike Maker, the son of the late multiple champion-producing stallion Giant’s Causeway will attempt to make amends after a disappointing seventh-place finish in the Grade 3 Sycamore at Keeneland on Oct. 15, where he secured a stalking position early on and lost ground in the stretch after being pinched in between horses around the eighth-pole.

“I felt he was a bit closer to the pace than he likes to be, so we crossed through that race,” Maker said.

Maker claimed Aquaphobia for $62,500 from a fourth-place finish in an optional claiming tilt on Jan. 26 over the Gulfstream Park turf to graded stakes winners Hay Dakota and Sombeyay. Prior to joining Maker’s barn, Aquaphobia was a seven-time winner, including two stakes victories in the Stanton in June 2016 at Delaware Park and the Super Bowl in February 2018 at Santa Anita.

“He’s just an old class horse that we had our eye on for some time,” said Maker, who also claimed 2016 Red Smith winner Bigger Picture for $32,000.

Maker stretched Aquaphobia out to 1 3/8 miles in the United Nations after coming up 1 1/2 lengths shy of victory when fourth in the Wise Dan (G2) on June 20 at Churchill Downs.

“We had been keeping some stiff company going shorter and when we stretched him out, he got the job done,” Maker said.

Bred in Kentucky by Mr. and Mrs. M. Roy Jackson, Aquaphobia is out of the multiple Grade 1-winner Pussycat Doll, who is a half-sister to Grade 1-winner and multiple graded stakes-winning producing sire Jimmy Creed.

Trainer Graham Motion sends out Wertheimer and Frere homebred Ziyad after a third-place finish in the Grade 3 Sycamore.

The 5-year-old dark bay or brown son of 2002 World Horse of the Year Rock of Gibraltar was a neck shy of a Group 1 victory when trained by Carlos Laffon-Parias in France, when third to Way to Paris in the Grand Prix de Saint-Cloud on June 28. He was second to Coronet by the same margin in last year’s edition of the 1 1/2-mile event at Saint Cloud.

In his first start for the Motion barn last out, Ziyad was placed in mid-pack early on and lost a bit of ground around the far turn while under coaxing from jockey Manny Franco but displayed an authoritative rally to capture third.

“He just came up to us that week from quarantine and I hadn’t had him for very long at all,” Motion said. “He seems to be uncomplicated. From the morning works, he seems a little one paced.”

Ziyad made his North American debut when finishing third as the favorite in last year’s Canadian International (G1) at Woodbine.

“He has the class there,” Motion said. “It’s the end of the year, which is a little bit of a worry. There are certainly concerns, but he’s done well, and this race has been in the back of our mind. He’ll get a rest after this; I won’t take him to Florida. We’ll point him for the spring.”

Ziyad is out of the stakes-winning Sillery mare Arme Ancienne, who is a half-sister to Grade/Group 1 winners Artiste Royal and Aquarelliste.

“Manny knows him, and I think it’s good that he’s ridden him once before and gotten to know him,” Motion said.

A New York homebred owned by Tom Egan’s Trinity Farm, the 6-year-old Pure Prize gelding received a well-executed ride by jockey James Graham in the Sycamore, where he split horses turning for home, was tipped out three wide and secured the advantage in mid-stretch to notch a two-length victory.

Lightly raced this season, Red Knight received an eight-month layoff after finishing fourth in the W.L. McKnight (G3) on Jan. 25 at Gulfstream Park, but came back with a strong runner-up effort to Arklow in the Kentucky Turf Cup (G3) on Sept. 12 at Kentucky Downs.

Breaking from post 10, Red Knight will be ridden by Jose Ortiz.