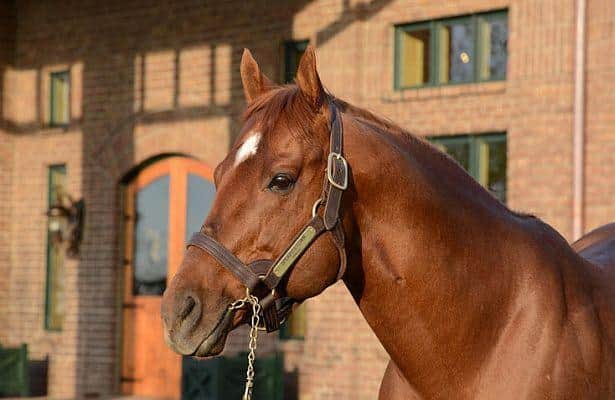 As a runner, Speightstown developed into a champion. Besieged with minor injuries early in his career, the always talented chestnut finally put it all together as a six-year-old. In a half dozen starts that year, Speightstown won five, including two 1:08 flat performances. One of them was a track record at Saratoga, in the Grade 2 Alfred G. Vanderbilt, and the other clinched a championship. His win in the Breeders’ Cup Sprint at Lone Star Park was as impressive as it was definitive. He was the fastest thing going in the racing season of 2004. As a WinStar Farm sire, Speightstown is on his way to becoming even better. Let’s take a quick look at the 15-year-old son of Gone West’s steady ascent up the rankings of top sires in North America.

2008 - Finished 5th among first crop sires of North America, with more than $1.2 million in earnings. His leading earner that year was Lord Shanakill, a group 1 winner in Europe.

2009 - Finished 4th among second crop sires, with more than $5.1 million in earnings. His leading earner that year was Munnings, who was a multiple graded stakes winner sprinting, but versatile enough to battle it out with Summer Bird for second in the Grade 1 Haskell at nine furlongs.

2010 - Finished 4th among second crop sires, with almost $6.8 million in earnings. That figure also saw him break through into the top 10 of the overall sires list, finishing 10th. His leading earner that year was Haynesfield, who is well remembered for kicking up his heels to the champion Blame in the Jockey Club Gold Cup.

2011 - Continued to move up the overall sire list of North America into 7th with earning of nearly $7.2. The hard knocking Canadian, Essence Hit Man was his top money earner in 2011, but 14 stakes winners helped build his impressive total.

2012 - Cracked the top three on the sire list with just a shade under $10 million in earnings. His 20 stakes winners last year put him behind only Giant’s Causeway, with Travers winner* Golden Ticket leading the way among his offspring.

2013 - With two weeks left in the season, it does not look like he will catch Kitten’s Joy for the top spot, but his current placing of number 2 on the overall list of North American sires looks pretty secure. Speightstown also ranks as the top dirt sire in North America by earnings this year.

As a former champion sprinter, you’d expect Speightstown to pass on his speed to his top sons and daughters, and to some extent, you’d be right. Among his 22 stakes winners this year include a number of horses following in the championship footsteps of their famous sire. Quality sprinters like; Dance to Bristol, Reynaldo the Wizard, Sum of the Parts, Bridgetown, Lighthouse Bay, and Fast Bullet are further proof that the Eclipse Award Champion Sprinter of 2004 can bring the speed when it comes to his offspring. There is more to him as a sire than just turning out six and seven furlong specialists, though.

As evidenced by graded stakes victories at the classic distance of ten furlongs, by several of his top sons like Haynesfield, Golden Ticket, and Delegation, Speightstown has proven to be much more than a sire of sprinters. The story of his stallion prowess does not end there either.

I’ve always liked Speightstown as a sire. Much like his sire, Gone West, he has demonstrated the ability to sire good runners on a variety of surfaces, and at a variety of distances. It was his latest grade 1 win as a sire; however, that raised my appreciation for him as a sire to an even greater height. In Seek Again’s initial race in the United States, the sophomore turf horse, going ten furlongs on the turf, made mincemeat of a solid group of American runners in the Hollywood Derby. It was the kind of performance that left me wanting more. Thankfully, plans for the Juddmonte runner include a four-year-old campaign in the U.S. with trainer, Bill Mott.

Six furlongs on the dirt, a mile and a quarter on the grass, it would seem to make little difference to one of the best sires in America. Bring a good mare to Speightstown, and the result is likely to be a foal with the best qualities of both.

Meet Brian Zipse
Brian has been a passionate fan of horse racing his entire life. Taken to the races at a very young age, he has been lucky enough to see all the greats in person from Secretariat, Forego, and Ruffian through Rachel Alexandra, Zenyatta, American Pharoah and Justify. Before coming to the Nation, Brian displayed his love for the sport through the development of his horse racing website, which quickly became one of the most popular blogs in the game. His new racing partnership venture, Derby Day Racing, invites more fans to experience the thrill of racehorse ownership.
The Editor of Horse Racing Nation from 2010-2017, Brian authored a daily column as Zipse at the Track, created the popular racing show, HorseCenter and added his editorial flare to the overall content of the website. Now a Senior Writer for HRN, Brian continues to contribute his thoughts on racing, as well as hosting HorseCenter. A big supporter of thoroughbred aftercare, he serves on the Board of The Exceller Fund.
Brian's work has also been published on several leading industry sites. He has consulted for leading contest site Derby Wars, is both a Hall of Fame and NTRA poll voter, and is a Vox Populi committee member.
A horse owner and graduate of DePaul University, Brian lives just outside of Louisville with his wife Candice and daughter Kendra.
ZATT's Star of the Week
Knicks Go