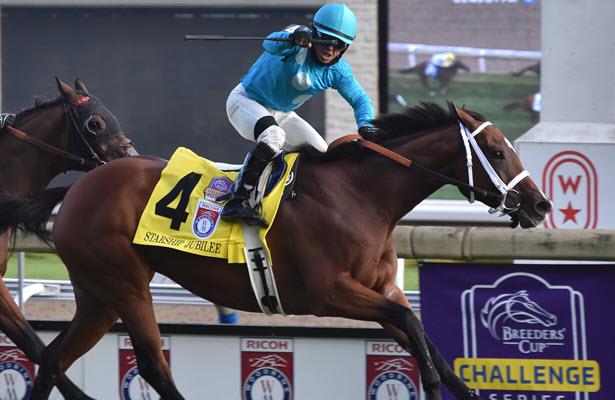 Dirt may be king here, but thankfully, turf racing has an important place in American racing. Led by the deep and talented girls, we have two wide-open turf divisions as we close in on this year’s edition of the Breeders’ Cup at Keeneland.

The biggest recent mover on the turf front came Saturday at Woodbine, when Starship Jubilee bounced back from her only loss of the year to register an important win in the Grade 1, $1 million Woodbine Mile.

The victory, which came over males, was her fifth stakes victory of the year and places the 2019 Canadian Horse of the Year firmly in the middle of the race for an Eclipse Award as outstanding female turf horse. The 7-year-old mare likely will make her next start against the boys again in the Breeders’ Cup Mile at Keeneland on Nov. 7.

Despite all the accomplishments of the diminutive Canadian mare, the division leader is still undoubtedly Rushing Fall. A former Breeders’ Cup winner, the 10-time graded stakes winner is coming off one of her biggest wins yet, having accounted for the Diana (G1) at Saratoga last time over a strong field that included Starship Jubilee.

It was her third win in 2020 without a defeat. The only turf horse to make last week’s Top 10 in the NTRA poll will not have another race before the Breeders’ Cup. While the Mile is not out of the question, it is more likely that the daughter of More Than Ready will be stretched out a bit for the 1 3/16-mile Breeders’ Cup Filly & Mare Turf at Keeneland, also on Nov. 7. Rushing Fall is one of many strong turf runners trained by Chad Brown.

Newspaperofrecord, who was beaten for the first time this season when second to Beau Recall in the Distaff Turf Mile (G2) last time at Churchill Downs, is another female who could be bound for the Breeders’ Cup Mile. An impressive winner of her first two starts this year, the speedy filly is being pointed to the First Lady (G1) at Keeneland on Oct. 3. There she could meet stablemate Uni, who was the champion female turf horse of 2019 but has not looked quite the same in her first two starts this year.

Another former Eclipse Award winner in the Brown barn, Sistercharlie, is also 0-for-2 this year, but the female champion turf horse of 2018 doesn’t seem very far away. Third in both the Diana and Ballston Spa at Saratoga, she is pointing to the Flower Bowl (G1) at Belmont Park on Oct. 10.

Other top turf females in a loaded division of 2020 include the trio of Mean Mary, Magic Attitude, Beau Recall and Got Stormy.

Mean Mary, from the barn of Graham Motion, has been near perfect in 2020, having won three consecutive graded stakes in impressive fashion before losing a tough battle to Rushing Fall last time in the Diana. She should appreciate the extra 16th of a mile of the Breeders’ Cup Filly & Mare Turf and may only need to win that race to secure an Eclipse Award.

Things will only get tougher for the 3-year-old import Magic Attitude, but her impressive American debut victory in the Belmont Oaks (G1) points her out as one to watch. Look for the formerly France-based filly to make her next run in the Queen Elizabeth II Challenge Cup (G1) at Keeneland on Oct. 10.

Beau Recall would be a long shot for an Eclipse Award at this point, but her impressive finish to win the Distaff Turf Mile over Newspaperofrecord last time makes her a must to include in any list of top American turf females.

Finally, Got Stormy has not quite looked like the juggernaut we saw one year ago, but she has turned in two sharp runs in a row. Second to the boys in the Fourstardave (G1), she came back to win the Kentucky Downs Ladies Sprint last time and looks like a real threat in the Breeders’ Cup Turf Sprint this time around.

Meanwhile, on the male side of the grass world, division leader Zulu Alpha suffered his second defeat of the year recently when third behind Arklow in the rich Kentucky Turf Cup at Kentucky Downs. While he has been on top of the list of American turf males since a win in the Pegasus World Cup Turf (G1) in January, the 7-year-old from the barn of Mike Maker has left the door open for others in search of an Eclipse Award with the loss.

Zulu Alpha will get another shot at his familiar rival Arklow in the Breeders’ Cup Turf at Keeneland on Nov. 7. A win by either would likely be enough for a championship. It certainly would clinch it for Zulu Alpha.

Another who has to be given a strong look for the Breeders’ Cup Turf is last year’s runner-up, United. Doing his running in Southern California, the son of Giant’s Causeway already has won three graded stakes this year, with only a narrow loss to Red King last time in the Del Mar Handicap (G2) standing in his way of a perfect 2020 so far. Both United and his Del Mar Handicap vanquisher are being pointed for the Breeders’ Cup Turf as well.

Cutting back in distance, Chad Brown could be a major player in the Breeders’ Cup Mile with the males as well as females. Digital Age turned in a breakthrough performance last time when storming to victory in the Old Forester Turf Classic (G1) on Kentucky Derby day. The 4-year-old Irish-bred may be ready to join America’s elite turf horses.

And perhaps taking a page from last year’s Horse of the Year, Bricks and Mortar, Brown returned the classy Analyze It to the races after a 22-month layoff. The occasion was a facile victory in the Red Bank (G3) at Monmouth on Sept. 5. When last seen before that, he was third, beaten less than a length in the Breeders’ Cup Mile of 2018. He will use the Shadwell Turf Mile (G1) at Keeneland on Oct. 3 as a prep for the same race this year.

Meet Brian Zipse
Brian has been a passionate fan of horse racing his entire life. Taken to the races at a very young age, he has been lucky enough to see all the greats in person from Secretariat, Forego, and Ruffian through Rachel Alexandra, Zenyatta, American Pharoah and Justify. Before coming to the Nation, Brian displayed his love for the sport through the development of his horse racing website, which quickly became one of the most popular blogs in the game. His new racing partnership venture, Derby Day Racing, invites more fans to experience the thrill of racehorse ownership.
The Editor of Horse Racing Nation from 2010-2017, Brian authored a daily column as Zipse at the Track, created the popular racing show, HorseCenter and added his editorial flare to the overall content of the website. Now a Senior Writer for HRN, Brian continues to contribute his thoughts on racing, as well as hosting HorseCenter. A big supporter of thoroughbred aftercare, he serves as the President of The Exceller Fund.
Brian's work has also been published on several leading industry sites. He has consulted for leading contest site Derby Wars, is both a Hall of Fame and NTRA poll voter, and is a Vox Populi committee member.
A horse owner and graduate of DePaul University, Brian lives just outside of Louisville with his wife Candice and daughter Kendra.
ZATT's Star of the Week
Belichick