Horse of the Year race should hinge on Breeders' Cup Classic 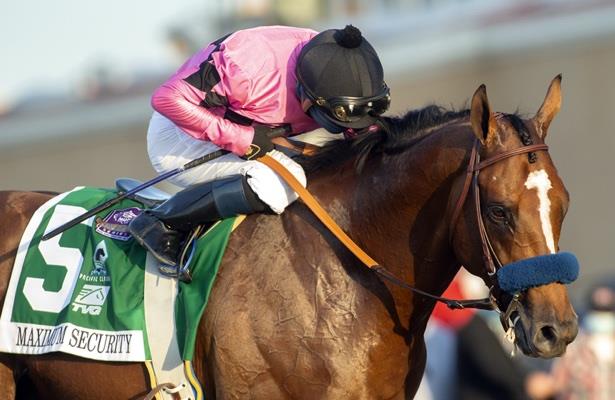 2020 has been a crazy year on numerous fronts. Just like everything else, Thoroughbred horse racing has been greatly affected. As far as the sport has been from the norm, though, we still have the Breeders’ Cup to look forward to, even if it is without fans in attendance.

As strange as it might seem to hold the year-end championships without spectators in the stands, the good news is that the races themselves are beginning to shape up. The Breeders' Cup Classic once again will be the big one, and this year, fresh off the Kentucky Derby and Preakness, it promises to be one of the more wide-open editions in years. The $7 million race also should decide which horse takes home the title of Horse of the Year in this most tumultuous season.

While a case could be made for a few horses who will not run in the Classic — Vekoma, Monomoy Girl and Midnight Bisou still hold hope — the Breeders’ Cup Classic likely will be the decider of which horse is crowned America’s best for 2020.

As we stand now, less than eight weeks out, the Classic has at least half a dozen horses who likely would only need to win at Keeneland on Nov. 7 to take home the most prized Eclipse Award. Let's take a look at the Big 6.

Maximum Security, last year’s 3-year-old champion, might be the horse to beat. The 4-year-old son of New Year’s Day has been through plenty over the past two seasons, but he keeps responding to the pressure when asked for his best in the stretch. A true racing warrior, he has responded well to his new surroundings in the barn of Bob Baffert. A resolute victory in the inaugural Saudi Cup began the year and return wins in the San Diego and Grade 1 Pacific Classic have proven that he is as difficult to pass as ever.

Fresh off a Kentucky Derby win, Authentic is the now horse. Only a second-place effort after breaking awkwardly in the Santa Anita Derby stands in the way of an otherwise perfect career so far for the Baffert-trained son of Into Mischief. Like his champion stablemate, he has a high turn of early speed, so it will be interesting to see how a matchup might play out. But in the meantime, he will have a date in the Preakness on Oct. 3, which could decide the 3-year-old championship.

A third horse from the Baffert barn does not have quite the hype as the other two. But in his last two races, wins in the Hollywood Gold Cup and Whitney (G1), Improbable proved that he belongs as a serious contender for the big one on Nov. 7. It’s easy to forget that he was well liked enough to go favored in both the Kentucky Derby and Preakness last year but unable to finish the job in 2019. The City Zip colt might finally have put it all together.

Of the non-Baffert trained horses, you could argue that no horse has accomplished more in 2020 than Tiz the Law. His consecutive trio of G1 wins in the Florida Derby, Belmont Stakes and the Travers is currently unmatched. And despite his runner-up performance as the heavy favorite in the Kentucky Derby, he will arrive at Keeneland as one of the favorites for the Classic. The New York-bred will have every chance to prove that his upset loss at Churchill Downs was not his absolute best when he takes on older horses for the first time in the Breeders’ Cup. The decision on whether he runs in the Preakness is still pending.

I felt that Tom’s d’Etat was a bit unlucky in his last start when third behind Improbable and By My Standards in the Whitney. A poor start and a slow pace did him in, but don’t forget he beat Improbable in the Oaklawn Mile and By My Standards in the Stephen Foster in the two races before that. His resume of only two wins in three starts this season remains a little light, but a strong fall highlighted by a win at the Breeders’ Cup would push him right to the top. At 7 years old, there can be little doubt that the son of Smart Strike has never been better.

Finally, there is By My Standards. He is undoubtedly the least respected of this list of six, but his resume of four wins and two seconds in 2020 would prove too good to deny if he were to add a Breeders’ Cup Classic to his list of seasonal accomplishments. The son of Goldencents already has accounted for the New Orleans Classic, Oaklawn Handicap and Alysheba Stakes this year, and he is unbeaten in four starts with regular rider Gabriel Saez in the irons.

This is not to say that these six excellent horses are the only viable Horse of the Year candidates. Art Collector, for instance, would be hard to deny if he could sweep to victory in both the Preakness and the Breeders’ Cup Classic.

Yes, the Breeders’ Cup Classic, even in this most bizarre of years, will be that important in the race for Horse of the Year. And in 2020, it looks like a most competitive race indeed.

Meet Brian Zipse
Brian has been a passionate fan of horse racing his entire life. Taken to the races at a very young age, he has been lucky enough to see all the greats in person from Secretariat, Forego, and Ruffian through Rachel Alexandra, Zenyatta, American Pharoah and Justify. Before coming to the Nation, Brian displayed his love for the sport through the development of his horse racing website, which quickly became one of the most popular blogs in the game. His new racing partnership venture, Derby Day Racing, invites more fans to experience the thrill of racehorse ownership.
The Editor of Horse Racing Nation from 2010-2017, Brian authored a daily column as Zipse at the Track, created the popular racing show, HorseCenter and added his editorial flare to the overall content of the website. Now a Senior Writer for HRN, Brian continues to contribute his thoughts on racing, as well as hosting HorseCenter. A big supporter of thoroughbred aftercare, he serves as the President of The Exceller Fund.
Brian's work has also been published on several leading industry sites. He has consulted for leading contest site Derby Wars, is both a Hall of Fame and NTRA poll voter, and is a Vox Populi committee member.
A horse owner and graduate of DePaul University, Brian lives just outside of Louisville with his wife Candice and daughter Kendra.
ZATT's Star of the Week
Improbable