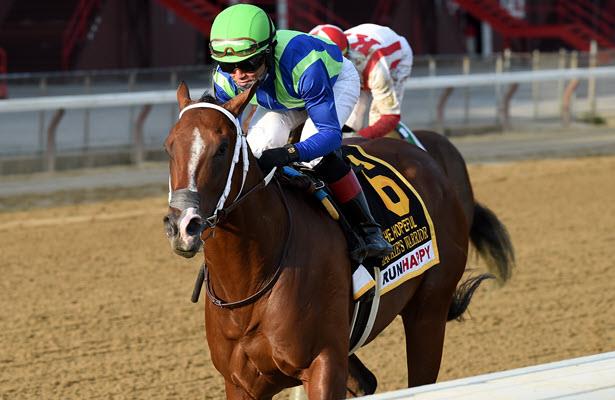 East Coast sensation Jackie’s Warrior is the likely favorite for the Breeders’ Cup Juvenile. He’ll get plenty of competition from Essential Quality, a promising son of Tapit, and Sittin on Go, a colt by new sire Brody’s Cause.

The always competitive Breeders’ Cup Juvenile Turf will see a matchup between the brilliant Fire at Will and powerful stretch runner Mutasaabeq.

Let’s get to know these contenders a little better.

Jackie’s Warrior is only the third colt in history to sweep the Saratoga Special (G2), Hopeful Stakes (G1) and Champagne (G1) since Dehere (1993) and First Landing (1958). The Steve Asmussen trainee is perfect in four starts and has earned $402,564. Jackie’s Warrior was a $95,000 KEESEP purchase for owners Kirk and Judy Robison and was bred by J & J Stables.

Pedigree: Jackie’s Warrior has a miler conformation and pedigree. His class might take him farther than 1 1/16-miles in the right company as he matures.

Jackie’s Warrior is the first blacktype earner out of Unicorn Girl. The mare’s half-brother Bernie The Maestro is a multiple stakes-winning sprinter/miler. Unicorn Girl is also a half-sister to stakes-winning Richard the Great, plus multiple stakes-placed juvenile Awesome Mass. The extended family includes Grade 1 winning sprinter Mayo on the Side and 1994 Canadian Champion 2-year-old Filly Honky Tonk Tune. Jackie’s Warrior has an unnamed half-sister by Candy Ride (ARG) and a weanling half-brother by American Pharoah.

A. P. Five Hundred, a son of A. P. Indy, is out of a Danzig half-sister to champion 3-year-old filly Sacahuista (winner of the 1987 Breeders’ Cup Distaff. A. P. Five Hundred was third in a trio of nine-furlong stakes, including narrow losses in the Oklahoma Derby (G3) and Super Derby (G2). He moved to Chile after his first season in Florida. Other than Jackie’s Warrior, A. P. Five Hundred is the damsire of a stakes-winning Chilean turf sprinter.

In only his second start, Essential Quality wowed the field in the 1 1/16-mile Claiborne Breeders’ Futurity (G1), drawing off to win by 3 1/4 lengths, without being threatened. The Brad Cox trainee has earned $295,144. The pretty gray colt is a Godolphin homebred.

Pedigree: Essential Quality has a miler pedigree, and he might go farther in the right company with maturity. He’s bred on the same Tapit/ Elusive Quality cross as the listed winning turf sprinter Blind Ambition.

Essential Quality is the first blacktype earner out of Delightful Quality.  The mare is a graded stakes-placed sprinter who earned $253,900 in 13 starts. Delightful Quality is a half-sister to Folklore, winner of the 2005 Breeders’ Cup Juvenile Fillies. Folklore’s grandson Contrail was last year’s champion 2-year-old in Japan. Others in the family include Grade 1 winning sprinter/miler Come Dancing, who set a new stakes record of 1:08.74 in this year’s Honorable Miss Handicap (G2) at Saratoga, and Biddy Duke, the recent heroine of the Senator Ken Maddy Stakes (G3) over the Santa Anita turf. Essential Quality’s third dam Jeano was a multiple Grade 3-winning sprinter. Essential Quality has an unnamed yearling half-sister by Uncle Mo. Delightful Quality was barren for 2020.

Elusive Quality is the damsire of 88 graded/listed winners in North America. The bulk of his daughter’s offspring, led by two-time Eclipse Award winning sprinter Roy H, are sprinter/milers, although three have won listed events at 1 1/8-miles.

(Brody’s Cause - Set'n On Ready, by More Than Ready)

In his second start, Sittin On Go made a wide, sustained rally from near the back of the pack to defeat a full field of ten other rivals by a widening 2 1/2-lengths in the one-mile Iroquois Stakes (G3). The Dale Roman’s trainee has earned $145,520. Albaugh Family Stable purchased Sittin On Go as a weanling from breeder Wynnstay LLC through the KEENOV mixed sale for $65,000. A year later, Sittin On Go failed to meet his $62,000 reserve, so Albaugh Family Stable kept him. The same connections campaigned Brody’s Cause.

Pedigree: Sittin On Go has the conformation and pedigree to handle 1 1/8-miles to classic distances. With close 2 x 3 inbreeding to Giant’s Causeway and other turf influences scattered throughout his pedigree, Sittin On Go could be adept over the lawn as well as dirt.

First-crop sire Brody’s Cause, a beautiful son of Giant’s Causeway, captured the 2015 Claiborne Breeders’ Futurity (G1) and was third in that year’s Breeders’ Cup Juvenile behind eventual champ Nyquist. The following year, Brody’s Cause won the 1 1/8-mile Bluegrass (G1). The dark-bay colt was retired after off the board finishes in the Kentucky Derby and Belmont Stakes.

Brody’s Cause has six winners from 21 starters. His other blacktype earners are Anoakia Stakes winner Kalypso, plus Best Pal (G2) runner-up Girther, and Gospel Way, who hit the board in the Victoria Stakes and Display Stakes in Canada.

Sittin On Go is the third winner and first blacktype earner out of Set'n On Ready. The mare captured the 6 1/2-furlong Arizona Juvenile Fillies Stakes as the highlight of her 13-race career. Sittin On Go has a yearling half-sister by Mor Spirit.

Sittin On Go is bred on the same Giant’s Causeway/More Than Ready cross as Night Prowler, a multiple graded turf sprinter/miler who captured this year’s Sandy Lane Barbados Gold Cup.

Fresh off his victory in the With Anticipation Stakes, Fire at Will let them on a merry chase in the Pilgrim Stakes (G2). He was never seriously challenged and won as he pleased by two lengths. The Mike Maker trainee has won two of three starts and has earned $137,932. Troy Rankin bred the dark-bay colt. Three Diamonds Farm bought Fire at Will for $97,000 at the KEESEP sale.

Pedigree: Fire at Will has a turf router’s pedigree.

Declaration of War won or placed in 10 of 13 starts during his career and was the 2013 champion older male in Europe, England, and Ireland. In his only dirt start, the son of War Front just missed victory in an exciting photo finish in the 2013 Breeders’ Cup Classic.

Declaration of War stood for five years in the U.S. before being sold to Japan in 2019. He’s sired a dozen graded/listed winners in North America, lead by Grade 1-winning turf router Decorated Invader, who is a half-brother to Fire at Will’s dam Flirt.

Fire at Will is the first foal out of Flirt. The mare was unplaced in her sole start. Besides the aforementioned Decorated Invader, Flirt is a half-sister to stakes-winning turf sprinter Jubliant Girl, and that one’s full brother, stakes placed turf miler Cabral. Jubliant Girl bore French listed turf router Native American.

Fire at Will has an unnamed Distorted Humor half-sister who brought $72,000 at this year’s KEEJAN sale, and a weanling half-brother by Mendelssohn.

After a distant third-place finish in the Hopeful (G1) behind Jackie’s Warrior, Todd Pletcher switched Mutasaabeq to the turf. He was rewarded by a powerful last-to-first move in the Bourbon Stakes (G2). The bay colt swept by the field to win by a widening 2 1/4-lengths. BlackRidge Stables sold him as a weanling for $425,000 at the KEENOV mixed sale to Shadwell Stable. Mutasaabeq has two wins, and a third-place finish from three starts, and earnings of $189,600.

Into Mischief is a major sire who gets winners over all surfaces.

Mutasaabeq is the first foal out of Downside Scenario. The daughter of Scat Daddy hit the board in three of eight starts, and she’s a half-sister to a pair of blacktype earning sprinters. Half-brother Cool Cowboy achieved multi-national success and earned $736,781 in 28 starts. Downside Scenario’s half-sister Appeal to the Win is a stakes-placed turf sprinter. Downhill turf sprint specialist Pee Wee Ree is part of the family.

Mutasaabeq has an unnamed California Chrome half-sister who failed to meet her $17,000 reserve at this year’s KEESP sale. He also has a weanling half-brother by Uncle Mo.

Through hands-on work at barns, I learned valuable lessons about Thoroughbred conformation, gait, and temperament and later worked withThoroughbred rescue/re-train organizations. I have committed my passion for horses to the intensive study of pedigree and breeding theory for the last 20 years.

I support clients with all aspects of pedigree/breeding analysis, research, sales, catalogue review, and recommendations on claims or private sales. Clients include national leading owners, racing/breeding syndicates, the little guy with one mare, and everyone in between. 10-20% of all proceeds are donated to Thoroughbred rescue & retraining groups. Check out my website, Iron Maidens Thoroughbreds, and the IMTBreds blog.
I welcome your questions regarding pedigree, handicapping, and breeding. If you would like me to cover a specific topic, please contact me.
Email: lross@horseracingnation.com.
Twitter: @IMTBreds
Facebook: IMTBreds
LinkedIn: Laurie Ross