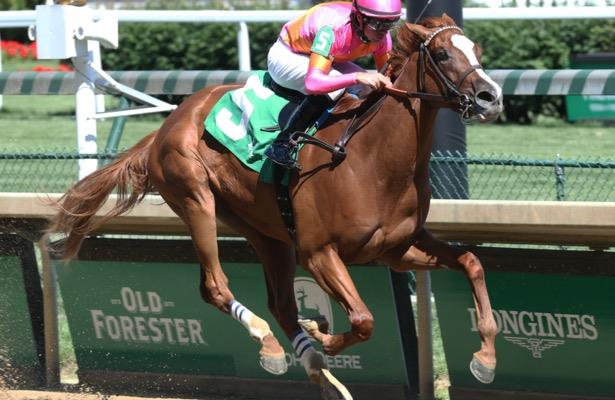 As strange as this sounds, the 6-for-7 Tonalist’s Shape enters the Grade 1, $350,000 Coaching Club American Oaks at Saratoga on Saturday as an underwhelming favorite. Not only does Tonalist’s Shape lack a Grade 1 victory at this point, she wins her races with average figures.

Bettors can search elsewhere. Velvet Crush is 12-1 on the morning line and beat some quality names in her most recent start, earning a competitive speed figure.

Velvet Crush leads the five selections across Saratoga and Monmouth.

To start off her season, Velvet Crush turned in a disappointing sixth in a May 10 allowance race at Gulfstream. Perhaps she needed one race off the 144-day layoff.

In a June 11 Churchill Downs optional claimer, Velvet Crush rebounded. She only won by ¾ of a length after tracking the pace and required some whip use late, but look at the two fillies completing the trifecta: Impeccable Style and Aurelia Garland.

Velvet Crush earned a 105 TimeformUS Speed Figure for the win. Also, she galloped out great, showing no signs of heavy fatigue afterwards.

As for Tonalist’s Shape, she won the Hollywood Wildcat Stakes at Gulfstream in her most recent start, defeating Dream Marie and Pleasant Orb, both decent fillies. The former ran second in the Delaware Oaks (G3), while the latter was second in the Acorn Stakes (G1).

Dream Marie and Pleasant Orb are noting special though. Plus, Tonalist’s Shape earned only a 104 on TimeformUS, a number that is roughly on par with every filly in this race. Why take 9/5 or less on a filly that is “on par” with the rest of the field?

For value purposes, Velvet Crush is the main choice. Despite six lifetime starts, she is still learning and can another step forward in this race.

He does not need a huge section devoted to him.

In his first start this year, Decorated Invader won the Cutler Bay Stakes at Gulfstream by 1 ¼ lengths. He then took the Pennine Ridge Stakes (G2) at Belmont by 4 ¾ lengths with a 114 TimeformUS Speed Figure, the highest figure in the field by two points (if turf figures even matter).

Decorated Invader’s fourth-place finish in the Breeders’ Cup Juvenile Turf last fall came as a result of a troubled trip.

Is the stretchout to nine furlongs a concern? Last August on this course, Decorated Invader broke his maiden at 1 1/16 miles by a dominating 3 ¼ lengths while geared down. Nine furlongs is not a huge difference compared to 1 1/16 miles. The two-turn configuration is the same.

Even at a short price, Decorated Invader is the choice.

As the third-place finisher in last year’s Belmont Stakes, Joevia is a familiar horse to most racing fans. He gave a great effort that day and went on a 223-day break afterwards.

After a successful return in an Aqueduct optional claimer in January to start off his new campaign, Joevia suddenly went backwards in the Razorback Handicap (G3) and Stymie Stakes, finishing a dismal 11th and 7th in those races respectively. What happened?

Joevia took 91 days off after those disappointing runs.

In his most recent start in the Westchester Stakes (G3) at Belmont, he did improve though. Joevia pressed the pacesetter and stayed close around the turn as Endorsed and Code of Honor took over, before fading to fourth by 11 ¾ lengths. Considering he showed more life and a quality horse in Code of Honor won the race, the loss is forgivable.

Now he projects to sit in a good position again. According to TimeformUS Pace Projector, Joevia will settle in third, right behind Bodexpress and Bal Harbour. This will give Joevia first strike on the turn.

Both Bodexpress and Bal Harbour enter off layoffs as well, making them vulnerable runners.

Give Joevia another chance against this weaker group. He owns great tactical speed and might move forward. Plus, the backclass is there.

At double-digit odds, Joevia is the choice.

Arklow rides a four-race losing streak into the United Nations Stakes (G1), including a loss at 6/5 in the Louisville Stakes (G3).

In his most recent start, Arklow could only close for sixth in the Elkhorn Stakes (G3) at Keeneland, 3 ¾ lengths behind Zulu Alpha.

Why does Arklow get the nod here?

For one, this a weak Grade 1 field. Also, the switch to jockey Mike Smith might wake him up a bit after losing under Florent Geroux in his last two starts. Geroux is a fine jockey, but sometimes a shakeup is needed.

On his better days, Arklow is capable of competing with the best turf horses. With no standouts in this race, he is the choice.

Horologist rides a six-race losing streak into this race. Yet, there are some positive races to point out, and a course affinity for this racetrack.

In her most recent start, she secured a great upfront position in the Santa Maria Stakes (G2), tracking the pacesetter Fighting Mad in second. But Horologist began to lose ground on the far turn and jockey Flavien Prat decided to pull her up.

Prior to that race, Horologist’s run in the Apple Blossom Handicap (G1) at Oaklawn was better than it looked on paper, as she came into the far turn with run to offer, only to be blocked by traffic. With little room open, she could only manage to close for sixth.

Last year, Horologist ran a strong third in the 2019 Cotillion Stakes (G1), finishing ahead of big names such as Bellafina and Serengeti Empress.

Horologist is also 4 for 4 at Monmouth, and that includes a win in the 2019 Monmouth Oaks (G3) over Jaywalk.

Given this is Horologist’s favorite course, expect her to fire. She is the choice.