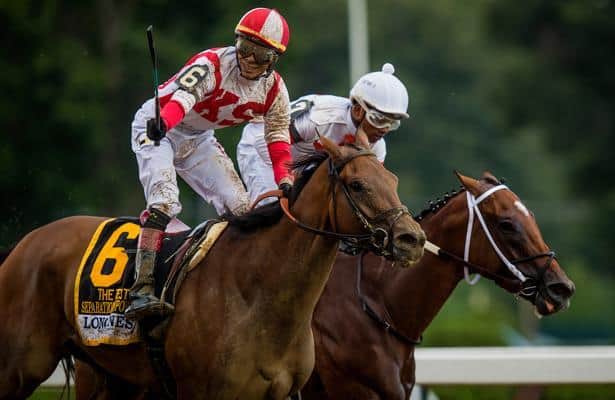 Betting a short-priced favorite vertically in a small field is not impossible. It requires the right situation and creativity. As long as the second choice is vulnerable, the favorite is playable on top with a value horse underneath.

The mistake would be to box the top choices, which I'll avoid on Saturday when playing two short-priced Chad Brown runners in the Vagrancy Handicap (G3) and Beaugay Stakes (G3).

Picks for Churchill Downs, Delaware and Fairmount also highlight this week's edition of the Friday 5.

Separationofpowers failed to handle two turns in her only two attempts. But her one-turn form is sharp and includes wins in the 2017 Frizette Stakes (G1) and 2018 Test Stakes (G1). She also ran well for a closing fourth in the Victory Ride Stakes (G3) last summer at Belmont after some trouble.

The Vagrancy does not contain any monsters. Dawn the Destroyer only looks like a mild threat from behind. Pacific Gale earned a high speed figure for running second in the Distaff Handicap (G3) to Come Dancing, but the final number on Beyer and TimeformUS was affected by projection voodoo.

Separationofpowers will sit off the leaders and overpower them on the turn.

If Separationofpowers holds at even money or higher, one idea is to key the filly on top over Heavenhasmynikki. The latter is projected to lead through a slow pace and will not go off lower than fourth choice. Also, use a win bet on Separationofpowers as a "saver" ticket to hedge the exacta.

Competitionofideas displayed a snappy late kick in her maiden and allowance wins last fall on this course. She managed to transfer that form to 1 ¼ miles in the American Oaks (G1) at Santa Anita in December, unleashing a furious rally in the stretch run to mow down the leaders.

Now she cuts back in distance for Brown and faces a soft-paced field. TimeformUS Pace Projector puts her second early, even though she began her last two races eighth and seventh. Essentially, she is capable of sitting closer here.

While 7-5 is low, her stablemate and European transfer Homerique appears suspect at the 8.5-furlong distance. Homerique’s two wins in Europe came a 1 1/4 miles. In fact, she debuted at 10 furlongs, which is unusual and only signals the former connections believed she could not run middle distances such as this one. Homerique will benefit from stretching out after racing in this spot.

If Homerique is vulnerable as the second choice, then Competitionofideas can work as a key on top over a longer-priced contender such as Andina Del Sur. According to the Pace Projector, Andina Del Sur projects to lead them uncontested through a slow pace, but she is probably not classy enough to hold off Competitionofideas late. Therefore, she is usable underneath.

A win bet on Competitionofideas at even money or higher will save the play if she wins and Andina Del Sur fails to fire.

Looking back at his 2018 form, he did OK to finish third in Belmont's Vosburgh (G1) behind Imperial Hint. He also finished third in the Tale of the Cat Stakes at Saratoga and Bet on Sunshine Stakes over the slop.

There are no monsters here, either. The 2-1 favorite Wilbo has lost all four starts this season, including three straight optional claimers and the King Cotton Stakes. On TimeformUS Speed Figures, he is not any better than Silver Ride. He also might find himself compromised by the pace, as will Storm Advisory.

Petrov possess a bit of speed, but he is unreliable. He won a Saratoga optional claimer last summer with a big 125 TimeformUS Speed Figure and then failed to hit the Top 3 in his next three starts, earning numbers of 101, 101 and 105.

As for Mr. Ashley, he comes here off a runner-up finish in a claiming race.

Silver Ride is the most reliable choice with the right running style.

Pace Projector believes Currency Chrome will lead this allowance race uncontested through a slow pace. The only question is class, as his lone win came in a maiden race at Tampa Bay. He earned a 97 on TimeformUS.

But as a lightly-raced horse, he can move up. The runner-up from that Tampa Bay maiden, Saintly Samurai, returned to break his maiden with a 100.

If Currency Chrome faces any pace pressure, it will come from Desert Spring. The high number of 1s in his running lines indicates he likes to set the pace, too, but he has competed mostly in seven-furlong races to one mile and forty yards. Some horses are able to set the pace in longer routes and struggle to secure the lead going shorter because of the fast pace.

The other two big challengers are Manipulated and Threes Over Deuces, but they will come from mid-pack. Currency Chrome has the pace advantage.

Manipulated is slightly higher on the morning line at 2-1 compared to Threes Over Deuces at 9-5. My idea for an exacta play is Currency Chrome over Manipulated.

As with Currency Chrome, Pace Projector places Ghaaleb the Great on an uncontested lead through a slow pace in this Fairmount optional claimer.

The out-classed Margarita Attack the next pursuer, and the gap between the Top 2 in the Pace Projector is noticeable.

Slated in third is even money favorite Lil Bit Tipsey, who might give Ghaaleb the Great a stiff challenge. Her overall class seems slightly higher too. But a pace advantage can even out a small class difference (not a large one). Furthermore, Lil Bit Tipsey is still only 1-for-8 overall.

Ghaaleb the Great only owns one win as well, but she is lightly raced with four starts. The victory came in a local open maiden race, and the second-place filly W W Put and Take returned to break her maiden by over six lengths with an 87 on TimeformUS.

Also in this race are Mary Jeans Wildcat and Last Surprize. However, both of them look compromised by the pace in this spot with their running styles.