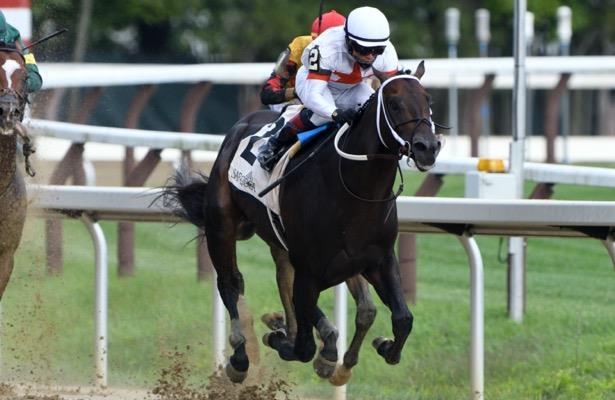 With decisions looming for some connections on whether to start in the $2,000,000 Breeders’ Cup Sprint or $1,000,000 Dirt Mile on Nov. 7 at Keeneland, both races are in the process of forming a definitive field. In the Sprint, runners are expected to travel six furlongs against a crowded group judging by the long probables/possibles list on HRN.

On paper, the two most likely pacesetters are trained by Steve Asmussen. Assuming he runs both runners, the strategy for each horse will be interesting as he might duel himself into losing if not careful.

Here are the expected horses separated by pace categories.

Yaupon and Nashville stand out as two of the biggest names on the list of possible entries. Both Asmussen-trained horses only know how to win on the lead, as shown by their few starts at this point.

In Yaupon’s case, the speedy 3-year-old went to the front in both the Amsterdam Stakes (G2) and Chick Lang Stakes (G3) while cruising to victory in each race.

As for Nashville, this dominating 3-year-old won his lone two starts in impressive fashion on the front end, with his 9 ¾ Keeneland allowance romp on Oct. 10 resulting in a massive 130 TimeformUS Speed Figure. He clearly brings the “wow” factor to this race, but he lacks experience.

What happens if Asmussen runs both Yaupon and Nashville? Trainers do not typically send their horses to duel on purpose. In all likelihood, one of them will set the pace and the other will concede about half a length to a length to ensure a reasonable pace while not diverting too far from their style. Otherwise, Yaupon and Nashville will burn each other out.

If only one of them start, then expect a perfect situation for Asmussen, especially if he runs Nashville. As shown below, the rest of the field does contain any crazy speed types to muddle the pace at six furlongs.

In other words, this is a good situation for both Yaupon and Nashville.

Right behind the two Asmussen speedballs are four possible pressers in the filly Frank’s Rockette, Complexity, C Z Rocket and Empire of Gold.

Frank’s Rockette has set the pace in some of her previous races, but in in the recent Gallant Bloom Handicap (G2) at Belmont, she did track the leader comfortably in second rather than lead.

If Complexity starts in this race rather than the Dirt Mile, then he cuts back to a six-furlong sprint after pressing the leader in a one-mile Kelso Handicap (G2). When horses cut back from a route to sprint, it becomes more difficult to lead because of the different pace styles of each race.

Empire of Gold pressed the pacesetter No Parole in the Phoenix Stakes (G2) at Keeneland and overtook him in the stretch run on his way to a surprising 51-1 runner-up finish at massive odds. The connections figure to stick with what works.

C Z Rocket pressed the pacesetter in both the Pat O’Brien Stakes (G2) at seven furlongs and the Santa Anita Sprint Championship (G2) at this same distance. But the latter featured a slow pace, which makes his early position harder to pinpoint. He might press, or it is possible he will concede two to three lengths in this larger field with quality speed.

The projected stalkers include Vekoma, Firenze Fire and Diamond Oops.

Vekoma’s connections must decide between a six-furlong sprint or two-turn mile. In a perfect world, Vekoma would compete in a one-turn elongated sprint. But only the female sprinters get to compete at seven furlongs in the Breeders' Cup. At less than one mile, Vekoma is not quick enough to contest the lead, but he can keep up with them.

Firenze Fire used a tracking style successfully in the Vosburgh Stakes (G2) by giving chase in second. He took over on the turn before pulling clear by 2 ¾ lengths.

Diamond Oops made use of stalking tactics in the Phoenix Stakes, but he is also capable of settling into a variety of spots.

Asmussen might start another one in Echo Town, and this colt is less speed crazy. In the Phoenix, he came from fifth to close for a mild third. Three starts ago in the Allen Jerkens Stakes (G1) at Saratoga, he closed from seventh to win.

Considering Asmussen might run one or two pacesetters in this spot, it is safe to assume that Echo Town sticks to a conservative strategy.

Whitmore is a confirmed closer from either midpack or farther. In the Phoenix, he came from seventh to pick up a mild fourth, only a head behind Echo Town. Most racing fans know how Whitmore runs by now.

Flagstaff ran as a pacesetter in the Santa Anita Sprint Championship, but only by default because of a small field and lack of true pacesetter. In this Breeders' Cup field, except him to lay back farther. As an example, he closed from 11th in the Count Fleet Sprint Handicap (G3) to finish second.

Hog Creek’s Hustle’s style is no mystery. He wants to close from the back in a large field. In his Oct. 9 start in a Keeneland optional claimer, he lagged in ninth early before making his move for second at the end.

Expect Collusion Illusion to join him. In the Santa Anita Sprint Championship, he ran as a stalker behind Flagstaff and C Z Rocket. But in a larger field such as this one, he is a closer in the same vein as Hog Creek Hustle. Notice he began the Bing Crosby Stakes (G1) in seventh before closing strong and picking up his first Grade 1 victory.

But again, both closers need sparks to fly between Yaupon and Nashville, or for one of the pressers to step up and challenge them.