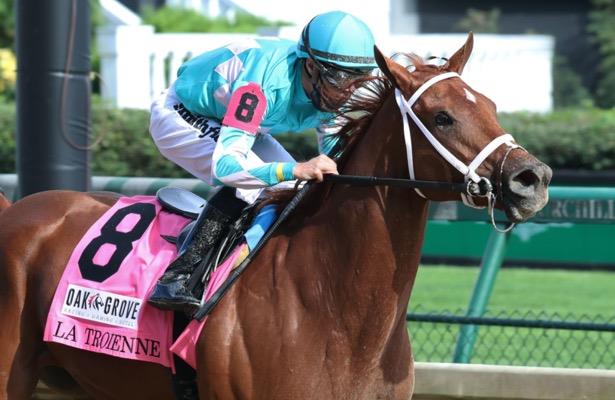 Unlike last year, the upcoming $2 million Breeders’ Cup Distaff on Nov. 7 at Keeneland does not feature a blazing pacesetter in the same vein as Serengeti Empress. Although the field could change, right now the pace appears fast to moderately fast, just like the Breeders’ Cup Classic later in the card.

Here are the possible entries separated into respective pace categories.

As stated, no true pacesetters are lined up. With that said, there are fillies and mares with tactical speed, and one of them will take the lead by default.

[Related – Breeders' Cup Distaff: Who are the fastest contenders?]

Former Distaff champion Monomoy Girl obviously sticks out as a mare with speed, but she prefers a horse or two in front. In the recent La Troienne Stakes (G1) at Churchill Downs, she ran as a stalker in third.

In the 2018 edition of the Distaff, she gave chase in second to the overmatched pacesetter Wonder Gadot.

Watch how Monomoy Girl waits patiently in that second spot before taking over on the turn and prevailing in the stretch over the closers.

If Monomoy Girl draws well enough to take a similar strategy, she is in a good place. It depends on whether she draws outside the next two names.

Is Swiss Skydiver entering this race? In the Preakness Stakes, she sat close and took over the lead before Authentic was able to settle into the position. Earlier in the year, she won the Gulfstream Park Oaks (G2) after setting the pace early. But overall, this is a natural presser who is more likely to sit in second or third unless inheriting the lead by default.

As for Ollie’s Candy, her Apple Blossom Handicap (G1) and Ogden Phipps Stakes (G1) efforts months ago prove she is capable of enduring a fast pace and still fight on late. But Ollie’s Candy did not set the pace in either of those cases, she and went back to a stalking style in the Spinster Stakes (G1) at Keeneland in her most recent start.

Another negative about Ollie's Candy is that she loses a lot. Regardless of whether the pace favors her, she enters with seven losses in a row.

Sorting out the rest of the list is tough.

Ce Ce, Speech, Harvest Moon, Vexatious, Valiance and Horologist all own enough speed to stay within striking distance of the leaders. To make a note about Vexatious, at shorter distances she fits better in a mid-pack or closer category. But at nine furlongs or longer, she is more capable of staying in the picture early and therefore becomes a larger threat, as shown by her victory in the Personal Ensign Stakes (G1).

Candidates to bring up the rear of the field include Dunbar Road and Point of Honor, with the latter filly the favorite to sit in last early.

Dunbar Road is a possible trailer too, based on how she fell back to 10th in last year’s Distaff. She runs as a mid-pack type in other races, but sometimes a larger field changes running style by default.

Blue Prize did close from off the pace last year to capture the Distaff. But remember she had the help of Serengeti Empress teeing up the race for closers with those fast fractions. Without the presence of a need-the-lead type such as Serengeti Empress willing to set any fractions to secure the front, the task is difficult for closers.

Forever Unbridled won as a late closer from seventh in 2017 at Del Mar, but an unfair outside bias also helped make the results of that Breeders’ Cup strange.

Expect another Distaff like Monomoy Girl’s 2018 edition. The filly or mare tracking the leader in second about a length off the pacesetter is probably in the best spot.

If Swiss Skydiver sticks to this race rather than the Classic, it could add enough spice to the pace to give mid-pack and closer types a glimmer of hope if a hot pace is ignited between her, Monomoy Girl and Ollie's Candy. But overall, the Distaff names lined up right now favor the front.