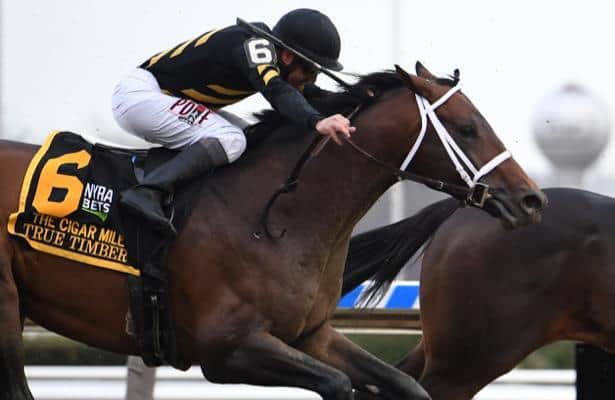 Without the presence of Volatile, the Grade 2, $150,000 Vosburgh Stakes at Belmont on Saturday lacks a huge star to grab headlines for this six-furlong sprint. Even though it lacks a major name, bettors might find this race an interesting one to attack betting-wise.


From a pace scenario standpoint, the most logical choice is True Timber. On Aug. 29, he gave a solid effort for third in the Forego Stakes (G1) on slop at Saratoga.

Here is a brief recap and video.

In the initial stages, True Timber duels with Complexity on the lead through 22.28 and 44.63 fractions, with TimeformUS marking the half-mile number in red.

Even as Complexity takes a slight edge on the turn, True Timber never gives up.

True Timber stays in the picture with Complexity all the way until the wire, as Win Win Win takes advantage of the fast pace and mows them down in the stretch. The TimeformUS chart shows True Timber only losing by 1 ¼ lengths with a 123 figure, which translates into a nice effort given the pace and the quality of horses he ran against.

Earlier in the year, True Timber also ran fourth in the Gulfstream Park Mile (G2) and eighth in the difficult Pegasus World Cup.

According to TimeformUS Pace Projector, True Timber figures to control the lead with a slow pace. Against this weaker group, he should hold on late.

True Timber does not win often, but this is the time to bet him.

First of all, toss out the turf attempts.

When Share the Ride made his debut for Arriaga, he ran a good closing second to Awesome Anywhere in a Monmouth Park optional claimer on Aug. 9. He only lost by one length with a 111 TimeformUS Speed Figure, the second highest of his career.

After the two turf starts, Share the Ride came back to dirt in the Mr. Prospector Stakes at Monmouth on Sept. 12. This time he set the pace before meeting Awesome Anywhere’s bid on the turn and turning him away in the stretch to win by 3 ¾ lengths. Multiple Grade 1 winner Mind Control made up some ground late for third.

For his initial stakes win, Share the Ride earned a career-high 119 speed figure. It is important to note that TimeformUS adjusted the figure, as they do in most slow or fast-paced scenarios. In this case, Share the Ride initially earned a raw 124 figure on TimeformUS before losing five points for a slow pace (22.45, 44.94).

In any case, Share the Ride’s 119 on TimeformUS ties him with Engage for the second-highest figure in the most recent start. But he is still behind True Timber.

Share the Ride is the second choice in this analysis.

Those are the two horses to use. What about the other entries?

Funny Guy seems a step below graded stakes competition. While he did finish fourth in the Forego, he was not able to make up ground in the stretch run. It will not come as a huge surprise if he wins, but he needs to take one more step forward.

Firenze Fire has lost a step in the transfer from trainer Jason Servis to Kelly Breen. While he still won the True North Stakes (G2), it came against a weak field.

Engage enters off a 329-day layoff for trainer Steve Asmussen after a fourth-place finish in the Breeders’ Cup Sprint. Perhaps Asmussen is using this race to warm him up.

To wrap this up, True Timber and Share the Ride are the two horses to use in multi-race wagers, with the latter option a lower priority. At 3-1 or higher, True Timber is a win bet too. If he is able to secure the lead, expect a big effort from this veteran.