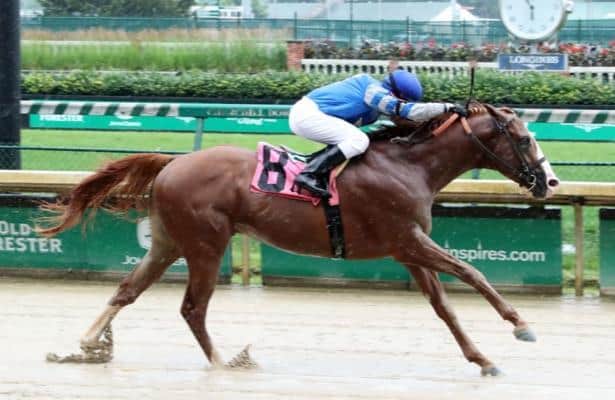 This week’s set of race analyses hopes to match last Saturday's six plays, which gave away three winners from six races, including North Dakota at $19.40 in the Red Smith Stakes (G3) and Wow Brown at $9.00 one race before him at Aqueduct.

In this post, the Grade 1, $500,000 Clark Stakes at Churchill Downs on Friday for dirt routers is the focus, and the race could kick off the wagering weekend the right way with Coastal Defense. The 4-year-old son of Curlin makes his second stakes start for trainer Dale Romans.

North Dakota had traffic problems in his prior race to the Red Smith, which led to him as the top selection. Even though this race analysis is on dirt rather than turf, the idea behind picking Coastal Defense is about the same after watching his most recent start because it involves traffic too.

Blog followers might remember Coastal Defense as the selection in the Fayette Stakes (G2) at Keeneland, where he ended up a mild fourth by 1 1/4 lengths on paper. His run deserves a careful watch.

Coastal Defense fares well on the first turn by saving ground and settling into the pocket position. Approaching the second turn, though, Joe Talamo elects to shift Coastal Defense to the right and presumably outside the four-horse line in front of him.

Unfortunately, Aurelius Maximus backs out of the front line and into Coastal Defense, causing him to lose ground and important momentum.

Aurelius Maximus then gets a clear shot to move outside and back into the top mix, while Coastal Defense must wait behind Aurelius Maximus and between Captivating Moon and Title Ready.

In mid-stretch, Coastal Defense still cannot tip outside with Title Ready next to him. Instead, Talamo elects to aim for the inside, where Coastal Defense does make up some ground late. But with Mr Freeze and Aurelius Maximus in front, it looks like Coastal Defense hesitates a bit.

As Coastal Defense balks at the lack of room, Title Ready manages to pick up third on the outside, while Mr Freeze and Aurelius Maximus take the top two spots.

On the short footage of the gallop out, Coastal Defense finally goes through the inside and passes his stablemate Mr Freeze.

In other words, Coastal Defense faces two moments of traffic adversity with Aurelius Maximus backing into him and breaking his momentum, and a lack of inside room in the stretch run. For most horses, it is easier to rally on the outside. Visually, he was capable of better than fourth.

Even with his fourth-place finish, Coastal Defense shows a respectable 115 figure on TimeformUS. In the Clark, the only two horses that break away from the 115-120 range on average are Code of Honor and By My Standards. The former runner figures to become overbet, and the latter has form questions after his non-effort in the Breeders’ Cup.

Prior to the Fayette, Coastal Defense stretched out to 1 1/16 miles in a Sept. 27 local allowance race in an impressive manner, winning easily by 2 1/2 lengths over Derby also-ran Major Fed. And for the first time in his career, he set the pace.

As a son of Curlin and the Giant’s Causeway mare Trensa, it makes sense that Coastal Defense ran his best career race at a distance beyond one mile. Trensa is also the dam of Hawkbill, the 2018 Dubai Sheema Classic winner at 1 1/2 miles, and former Kentucky Derby also-ran Free Drop Billy, who won the 2017 Breeders’ Futurity (G1).

Arguably, Coastal Defense was on his way to a career-best effort in the Fayette Stakes before the traffic problems hampered him.

In this spot, Coastal Defense starts from Post 11. Even though he runs the risk of getting caught wide on the first turn, the outside post might help Talamo keep clear of traffic throughout the race. Besides, Coastal Defense could use his speed to clear at least some of the field before the turn and secure a stalking position behind the leaders.

With all that said, taking a shot on Coastal Defense demands a good price, as he still enters the race with only one stakes races under his belt.

In multi-race wagers, it makes sense to back up the long shot with Code of Honor, who enters off a good runner-up finish to Complexity in the Kelso Handicap (G2).

Even though Code of Honor had dead aim on Complexity in the stretch run of the Kelso and lost ground, that is forgiven because Complexity turned in an excellent effort to take the Kelso. Code of Honor still earned a 125 TimeformUS Speed Figure in defeat.

Complexity’s fourth-place finish one start later in the Breeders’ Cup Dirt Mile with a 125 on TimeformUS is respectable too and only backs up Code of Honor’s speed figure in the Kelso.

But Code of Honor might become overbet as the “name” horse. Starting from Post 3 in a large field as a closer, he is also liable to encounter traffic problems.

By My Standards earned a 125 on TimeformUS himself when runner-up to Tom’s d’Etat in the local Stephen Foster Stakes (G2) in June. He finished by 4 1/4 lengths behind the winner.

Afterward, By My Standards was second in the Whitney Stakes (G1) behind Improbable, before capturing the local Alysheba Stakes (G2) with a 120 on TimeformUS. In his most recent start, By My Standards threw a clunker in the Breeders’ Cup Classic, finishing eighth by 14 lengths after chasing the front group.

The recent effort is forgivable as an outlier. If By My Standards can revert back to one of his 120+ figures on TimeformUS, he can also win.

For Win or Place bets, Coastal Defense is the best choice at 8-1 or higher, and that line of value is a firm one to stand on. If he starts at double-digit odds, then taking a shot on him to upset this field with a clear trip is a good bet. If he falls below 8-1, then the public is overbetting a horse who is still developing with limited stakes experience.