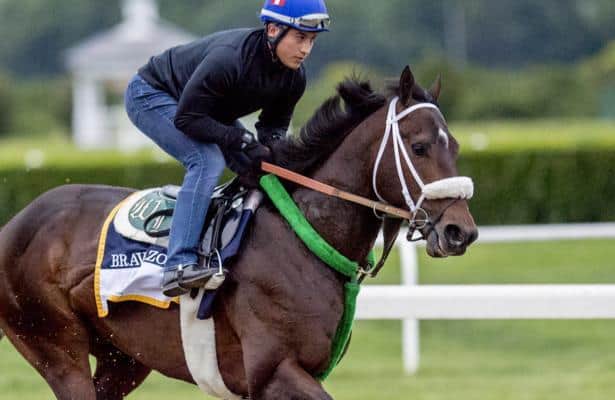 Passing altogether on the Grade 1, $500,000 Clark Handicap on Friday at Churchill Downs may be the way to go, as the race does not offer much in the way of strong value angles. On paper, there are two Breeders’ Cup Dirt Mile runners in Seeking the Soul and Bravazo making their first starts back, and both of them hold the best chances to win. After those two horses are four other legitimate contenders and two overmatched longshots.

Neither Seeking the Soul or Bravazo will offer value because the public recognizes those names, with Seeking the Soul last year's Clark winner and Bravazo a staple throughout the Triple Crown series. Both made their last starts at Churchill on Nov. 4. Four other main contenders -- Prime Attraction, Hence, Hawaakom and Leofric -- are unattractive as well because they simply do not look like Grade 1 horses.

Those four “other” horses can win with their best races. But nothing is in the past performances to make me excited about their chances.

Sometimes handicappers can gain ideas for their own tickets by reading the thoughts of someone who is confused. One man’s idea of an unplayable race can look like gold to another handicapper, as there is no one and only way to handicap and bet races.

Given that, here's my take on the field:

Seeking the Soul is not immune to throwing in clunkers. The 5-year-old son of Perfect Soul lost the Woodward Stakes (G1) at Saratoga by over 11 lengths after staying in contention until the turn for home. As the second choice, he burned money at 9-2.

Since then, Seeking the Soul overcame a slow pace in the Ack Ack Stakes (G3) to win comfortably by a little over a length and finished second in the Breeders’ Cup Dirt Mile to a reinvigorated City of Light. As the defending champion in this race, the Clark distance is not a problem. Maybe the Woodward is a throwout.

At nine furlongs on Churchill dirt, Seeking the Soul is 3: 1-0-2. He is also 9: 3-2-2 on this track overall, which means he only failed to finish in the money twice.

While this Dallas Stewart-trained runner offers little value as a returning Breeders’ Cup horse with solid local form, he rates as the top choice to beat this weak field.

Bravazo made a mild bid for third in the Dirt Mile, and considering the lesser names in this race, it feels like he should fare well in this kind of Grade 1. Only six months ago, he came within a half length of Justify in the Preakness Stakes. Since then, the Awesome Again colt has produced mixed results with one second, two thirds and two off-the-board finishes. He lacks any kind of win since the Risen Star Stakes (G2).

Even though Bravazo turns in the occasional strong race, his main problem comes from the habit of losing ground on the far turn. Then, if he runs well, Bravazo will make up some of that in the stretch run and pick up a check.

The Dirt Mile is a clear example of this awful habit.

In a race with a talented horses, Bravazo cannot get away with losing a few lengths and coming back again. Whoever is in the lead will hold too big of an advantage. As pointed out, though, the Clark field is not especially strong.

Maybe Bravazo can win, but he'll go off at single-digit odds. The likelihood of bettors catching a break in the price because of the eight-race losing streak is slim because familiar names from the Triple Crown series usually remain a popular wagering option.

Leofric and Prime Attraction are the next horses to consider, and they both ran well in the Fayette Stakes (G2) at Keeneland. Leofric won by a head over his rival. Leofric did well to mow down an uncontested leader, too.

Who did those two horses defeat, though? Triple Crown also-ran Hofburg finished sixth in this race, but his form already looked suspect in the Pennsylvania Derby (G1) when he lost by over 10 lengths. The fourth-place Hence is also in this race, and his two wins this year came in ungraded stakes races at Remington Park and Albuquerque Downs.

Leofric earned a 122 TimeformUS Speed Figure for the Fayette win, and Prime Attraction beat him with a 123. For those who believe in those two runners, the winning number for the Clark should fall around the 125 range. Hence earned a 118 and will need to step up his game.

If those horses fail, Hawaakom's chances greatly improve. This 8-year-old gelding loves the mud, which gives him one interesting angle if rain falls. Without showers, he still owns competitive numbers, such as the 123 TimeformUS Speed Figure earned in the Stephen Foster Handicap (G1) and Alysheba Stakes (G2) earlier in the year.

Hawaakom’s last two races are a concern, as he lost by over eight lengths in the West Virginia Governors Stakes (G3) at Mountaineer, and by over 21 lengths in the Greenwood Cup (G3) at Parx. In fairness, the latter effort came in a 1 ½-mile race.

Storm Advisory and Sightforsoreeyes complete the field, and those two Loooch Racing Stable runners appear overmatched. The former entry is interesting because he mainly runs in sprint races and tends to show some speed, which means he could act as a rabbit for Sightforsoreeyes in this spot. Why not couple the two horses?

In a perfect scenario for Sightforsoreeyes, he can complete the superfecta if Storm Advisory gives the pacesetters a hard time. Looking back in his form, Sightforsoreeyes only lost by 1 ¼ lengths to Leofric in a July optional claimer at Prairie Meadows.

So, after reading all of the above, is this race still playable? The best two horses come off solid Breeders’ Cup efforts. As for the rest of the field, not one of them feels reliable enough at this level.

Tossing out the Loooch horses in the win position narrows down the options, but the race still looks like a mess. Seeking the Soul and Bravazo get the reluctant nod at short odds, while Leofric and Prime Attraction can post a mild upset. Hence and Hawaakom are the C horses, with the latter receiving an upgrade on a wet track.