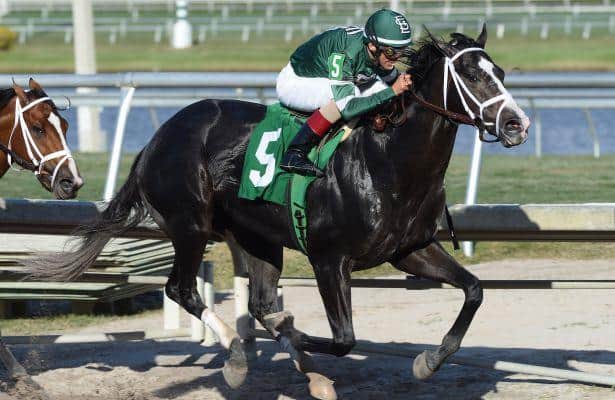 The 2017 renewal of the Grade 3 Dwyer Stakes is coming up this Saturday, July 8. The race came up both short, yet deep. Talented horses return to the races after layoffs, such as Practical Joke and Battalion Runner. The speedy Battalion Runner is the slight morning line favorite at 6-5, while Practical Joke, back around one turn, is close behind at morning line odds of 7-5, and also the highweight at 123 lbs.

It may not be the race of the year, but the Dwyer itself could prove to be a key in the future of the winner, as a stallion that is. The history of the race has been important to the winners when they move on to life as a stallion. Looking at the previous winners, the case can be made the Dwyer is a stallion making race.

Conquistador Cielo: In 1982, Conquistador Cielo would not only capture the Dwyer, but also the Met Mile, the Belmont Stakes, and the Jim Dandy. The colt was named the 1982 Champion Three Year Old Male and Horse of the Year. The horse went on to a stallion career where he sired horses like Marquetry and Wagon Limit. His stallion career produced more than 60 stakes winners.

Ogygian: The son of Damascus won the 1986 renewal of the Dywer Stakes. In his career, he also won the Riva Ridge Stakes and the Jerome Handicap. While Ogygian never replicated his own talent as a stallion, he has proven to be a quality broodmare sire. His daughters produced horses like Johannesburg, Street Boss, Friendly Island, and Gygistar.

Gone West: The following year, in 1987, Gone West, a son of Mr. Prospector, captured the Dwyer Stakes, along with the Gotham Stakes and the Withers Stakes. While Gone West was a decent racehorse, his legacy lives on in the breeding shed. His stallion career saw him sire horses like Da Hoss (2x BC Mile), Commendable (Belmont Stakes), Speightstown (BC Sprint), and Johar (BC Turf). As a broodmare sire, Gone West’s daughters have produced horses like Union Rags, Violence, Awesome Feather, and Brilliant Speed.

Seeking the Gold: In 1988, Seeking the Gold not only had the Dwyer win on his record, but wins in the Peter Pan and the Super Derby. He also placed second in the Breeders’ Cup Classic, Travers, and Haskell. While he did not get year end honors, he made a huge impact in the breeding shed. He sired horses like Heavenly Prize (dam of Pure Prize), Flanders (dam of Surfside), Cash Run (half to Forestry), and Jazil (Belmont Stakes).

Cherokee Run: Cherokee Run was a very fast racehorse, winning the Dwyer in 1993. He also won races such as the Derby Trial, Lafayette Stakes, and in 1994, the Frank J. De Francis Memorial Dash and the Breeders’ Cup Sprint. The horse was also second in 1993 Preakness Stakes. As a stallion, however, he also proved his worth, siring top horses like War Pass, Chilukki, and Recapturetheglory.

Holy Bull: Holy Bull won the 1994 renewal of the Dwyer Stakes in a string of victories, briefly interrupted by the 12th place finish in the Kentucky Derby, which included wins in the Florida Derby, Blue Grass Stakes, Met Mile, Haskell, Travers, and Woodward. Holy Bull was named the 1994 Champion Three-Year-Old Male and Horse of the Year. He was inducted into the Hall of Fame in 2001. As a stallion, Holy Bull sired horses like Macho Uno (Champion 2YO), Giacomo (2005 Kentucky Derby), Flashy Bull (Stephen Foster). Additionally, Holy Bull is the broodmare sire of top sprinters Judy the Beauty, Munnings, Cairo Prince, and Carravagio.

Forestry: Forestry was a multiple graded stakes winning son of Storm Cat. As a racehorse, Forestry not only won the 1999 Dwyer, but also the King’s Bishop, and placed third in the Haskell. Forestry went to stud in 2000 and soon would sire horses like Discreet Cat, Shackleford, and Diplomat Lady. Forestry is also the sire of the $16 million horse, The Green Monkey. As a broodmare sire, Forestry's latest accomplishment is being the broodmare sire of the 2016 Kentucky Derby winner, and champion, Nyquist.

The Dwyer Stakes has lost some momentum in recent years, but has a rich history of top racehorses choosing the Dwyer as a spot to get back to winning ways and to springboard to bigger and better things.

I have loved horses for as long as I can remember, starting when Funny Cide crossed the wire in the 2003 Kentucky Derby. Thanks to my Dad, I now consume every ounce of thoroughbred literature I can.

When I am not stuffing my brain with pedigrees, I spend my free time with my fiancé, Daniel, and our dog, a Boxer mix named Piper. I enjoy hiking, reading, canoeing, and just relaxing.

In addition to Horse Racing Nation, for which I've shot numerous events, including the 2018 Kentucky Derby, I work for Bella Baby Photography, as well as a blog on my own platform.