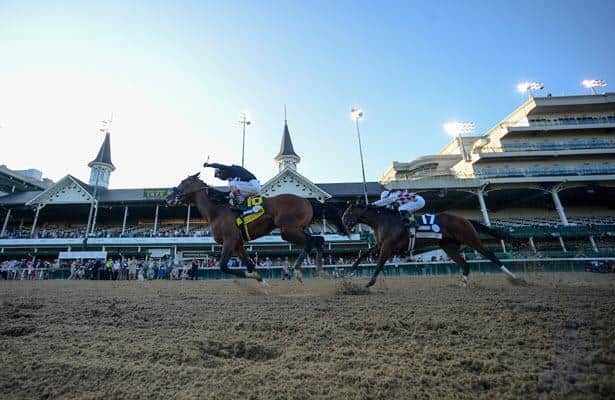 So far, four Kentucky Derby preps races have been run in that territory, with the most recent being the Kentucky Jockey Club at Keeneland. This weekend will feature the Lecomte (G3) at Fair Grounds, which will offer 10 points to the winner.

Several Lecomte contenders have been added to the list.

Cox told the Blood-Horse that he intends to start racing the colt in February. Essential Quality is best-priced at 12-1 in Las Vegas futures, the second choice behind Life Is Good at 9-1.

The third-place finisher in the Breeders’ Cup Juvenile and winner of the Kentucky Jockey Club, Keepmeinmind will arrive at Oaklawn for the winter between Christmas and New Years Day.

The colt returned to work on Wednesday at Oaklawn, going four furlongs in 50.2 seconds.

Trainer Robertino Diodoro said he had not mapped out a course that might lead to the Derby, but virtually ruled out the Jan. 22 Smarty Jones Stakes, the first Derby points race of the year at Oaklawn, as it is shorter than his liking.

Mandaloun, who has yet to run in a stakes race, is 2-for-2 in his young career with the latest victory coming in an allowance optional claiming race at Churchill Downs on Nov. 28.

The Juddmonte Farms homebred is entered in the Lecomte on Saturday at the Fair Grounds and will likely go off as the favorite.

Last time out the Dale Romans-trained colt finished second in the Kentucky Jockey Jockey Club (G2). It took him two tries to break his maiden at Churchill Downs.

Smiley Sobotka is spending his winter at Gulfstream Park, where he returned to work on Dec. 27. He most recently worked Sunday, going five furlongs in 1:02.57.

In years past Señor Buscador would have Derby qualifying points on his record already. However, due to using Lasix, he did not earn those offered by the Springboard Mile.

Trainer Todd Fincher said he will come off Lasix for the Derby trail. Following the win Señor Buscador headed for Sam Houston, where he last worked on Jan. 2.

The second-place finisher in the Breeders’ Cup Juvenile Turf Sprint moved to dirt for the Springboard Mile, where he also finished second. The colt trained by Steve Asmussen, last worked Wednesday at Oaklawn, going five furlongs in 1:00.8.

Founder finished in fifth place at the Breeders’ Futurity (G1) at Keeneland on Oct. 3. The $600,000 colt has not worked since his last race, a third-place effort at Churchill Downs on Nov. 2.

Since winning the Street Sense Overnight Stakes on Oct. 25 at Churchill Downs, King Fury has not been as impressive, finishing seventh in the Breeders’ Cup Juvenile and most recently coming in seventh in the Kentucky Jockey Club. He has not worked since.

Midnight Bourbon is entered in Saturday’s Lecomte. The second-place finisher in the Iroquois (G3) also finished third in the Champagne (G1). He last worked Jan. 4, going five furlongs in 1:01.0.

The Brad Cox trainee broke his maiden Dec. 19, sprinting in his first time out at the Fair Grounds. He earned a 90 Beyer speed figure for the six-furlong race. A son of Into Mischief, the Juddmonte Farms homebred last worked Saturday at the Fair Grounds, going five furlongs in 1:02.4.

Proxy is entered in the Lecomte. He last worked there on Saturday, breezing five furlongs in 1:02.2. Trained by Michael Stidham, the colt moved to 2-for-3 last out by winning a 2-year-olds' allowance race at the Fair Grounds. The race had a four-horse field. He survived a disqualification review to earn the win over Good First.

Quick Tempo won the Sugar Bowl on Dec. 19 at the Fair Grounds, his first stakes victory. Before that he had finished second in the Nyquist at Keeneland on Nov. 6 and had an allowance win at Parx on Oct. 20. The colt has not worked since before the Sugar Bowl victory.

After winning a seven-furlong maiden race Nov. 5 at Churchill Downs, Scarred returned to the Louisville track on Nov. 28 and finished second in a 1 1/16-mile allowance race behind Hidden Stash. The $380,000 colt last worked Monday at Oaklawn Park, breezing five furlongs in 1:00.6.

The winner of the first 2021 Kentucky Derby points prep race, the Iroquois, Sittin On Go finished off the board in both the Breeders’ Cup Juvenile and the Kentucky Jockey Club. He returned to work after that race Dec. 27 at Gulfstream. In his last work Sunday he went five furlongs in 1:00.95.

Super Stock won his only stakes victory at Lone Star in the Texas Thoroughbred Futurity on Aug. 11. In his last race, the Street Sense Overnight at Churchill Downs on Oct. 25, he finished second. The colt last worked on Nov. 16 at Churchill Downs.

The third-place finisher in the Kentucky Jockey Club, Arabian Prince is now at the Fair Grounds and is entered in Saturday’s Lecomte. In his last work on Monday he breezed four furlongs in 50.8.

Another Cox runner, a Shortleaf Stable homebred, broke his maiden going one mile at Churchill Downs on Nov. 15. He last worked on Saturday at Oaklawn, going six furlongs in 1:13.8.

The Goldencents colt, entered in Saturday’s Lecomte, has won his last two races, including a one-mile allowance at the Fair Grounds his last time out Dec. 4.  In his previous attempts against stakes company he finished fifth in two Grade 1s on the West Coast, the American Pharoah and the Del Mar Futurity.

The $170,000 purchase at the 2019 Keeneland September Yearling Sale broke his maiden last time out at Keeneland, going 1 1/16 miles on the main track. He last worked Dec. 8 at Churchill Downs.

The winner of the Breeders’ Cup Juvenile Turf for trainer Mike Maker, Fire At Will would have to move off the grass to get on the Derby trail. He closed the first Future Wager pool at 30-1. He returned to work Friday on the dirt at Gulfstream Park, going four furlongs in 53.42.

After breaking his maiden at Indiana Grand on Oct. 12, the son of Carpe Diem out of the Smart Strike mare Abraquat finished second last time out in a 1 1/16-mile allowance race at the Fair Grounds, coming in second to Proxy. He is entered in an allowance race at the Fair Grounds on Saturday. In his last work he breezed four furlongs Wednesday in 48.0.

Greatest Honour earned an impressive maiden victory at Gulfstream on Dec. 26, going 1 1/16 miles. He has since returned to work at Payson Park Training Center.

The $235,000 purchase broke his maiden easily, going 1 1/16 miles on the turf at Churchill Downs on Oct. 28 and winning by 4 1/4 lengths. In his previous start he finished third in a one-mile maiden race on the main track behind Arabian Prince and Keepmeinmind. He has since moved to Fair Grounds for the winter and has not worked since Dec. 24, when he went four furlongs in 48.4.

The Bonne Chance Farm homebred broke his maiden on his fourth attempt going 1 1/8 miles on the main track on Nov. 28 at Churchill Downs. Since, he has returned to work at the Thoroughbred Center, last working on Friday, when he breezed six furlongs in 1:15.4.

A Nov. 15 maiden winner race going one mile at Churchill Downs, he is now at the Fair Grounds, where he is entered in Saturday’s Lecomte.

Sound the Charge won his only start, going seven furlongs at Keeneland on Oct. 18. The gelding is currently at Oaklawn Park, where he last worked Sunday, breezing five furlongs in 1:01.2.

Whiskey Double is 1-for-1, breaking his maiden going six furlongs on the main track at Churchill Downs on June 27. He is entered in an allowance race on Sunday at Fair Grounds.

Here is the remaining Midwest schedule of Derby points preps: